Traditionally, people gave ten per cent of their livelihood to the church. This, presumably, guaranteed the payer their place in heaven and also ensured a very rich and well fed church.

By the twentieth century this had been commuted to a cash sum, perhaps more appropriate than a tenth of all a person had. At Market Lavington Museum, we have a tithe receipt for money paid by Mrs Joseph Ashley. 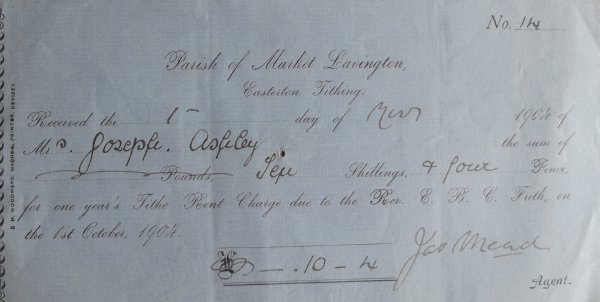 We struggle to know as much about Mrs Ashley as we’d like to. What a shame it is made that bit harder by women being treated as property of their husbands. We only know, for sure, the forename of Mrs Ashley’s husband.

However, we think she was Elizabeth, born around 1823/24 in Market Lavington. Our best bet is that she was Elizabeth Durnford who married a Joseph Ashley in Kensington (London) in 1852. This couple lived in various locations in London until they settled back in their home county of Wiltshire, at Great Cheverell.

Joseph died in 1900 and in the Market Lavington burial register he is said to be ‘of Great Cheverell’.

For the 1901 census, Elizabeth was lodging with the Gye family on White Street, Market Lavington.

But now a little doubt creeps in. Elizabeth was buried in Market Lavington churchyard on 24th February 1904 less than a week before this receipt was issued to her. Was paying her tithe of ten shillings and four pence about the last thing Elizabeth did? Or was an executor/relative very keen to make sure the Reverend Edward Blackstone Cockayne Frith got his tithe to smooth Elizabeth’s way to eternal happiness?

Or have we got the wrong Mrs Joseph Ashley?

Do let us know if you can help us.