When the Burgess family ceased trading as professional photographers in Market Lavington, Peter Francis took up the challenge of being ‘the’ photographer in the village. In these post Second World War days, many people had their own cameras so Peter not only maintained the tradition of recording events in the village, he also processed photos for other people. In the 1970s, at which time he was trading from premises in Church Street, he even turned his hand to processing colour photographs.

But here we are looking at a more mundane part of business life. Peter would have been posting letters and packages to customers around the world and, no doubt, it made sense to have his own pair of scales to weigh these items and let him know what the postage would cost. 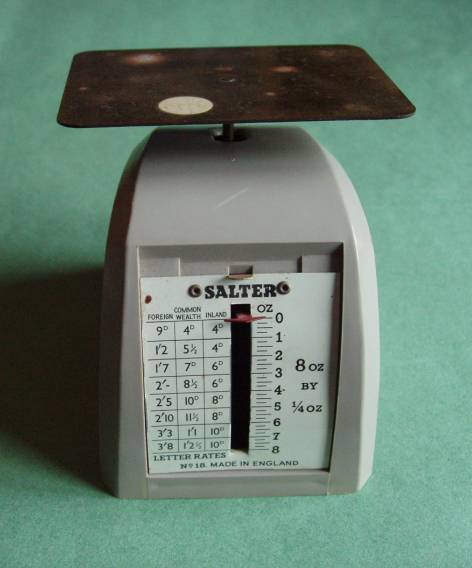 Peter bought these scales in the 1960s. They cost 19/6 (they still have the price sticker on them), which is 97p or just under £1 in current money. Similar scales are still sold today but they cost more like £30.

The body of the scales is in that efficient looking ‘no frills’ grey plastic which was popular at the time. The scale pan, complete with price label is metal.

Compared with today (now size matters as well as weight) the pricing structure was easy with prices shown for each ounce of weight up to 8oz (ounces) for inland, Commonwealth and overseas letters.

And what prices they were 4d which was four old pence or less than two pence these days could have sent your two ounce letter to anywhere in the United Kingdom. Sending to the favoured Commonwealth was barely more expensive so lightweight letters could be sent to Australia for the same price. The rest of the world, including France was much more expensive to post to.

We can only guess that Salter, the scale makers sold stick on price charts whenever postal prices went up. These scales clearly have the original price scale, pop riveted to the body of the device.