The little wallet which came back from the photographer or chemist – the one that held our holiday snaps – has all but vanished. The absolute deluge of photos taken these days are virtually all stored digitally and rapidly shared with one and all via all sorts of networking sites. Even the pleasure of a photograph album is something probably reserved for a wedding day and not much else.

But at least at a museum we can preserve some memories and here is one of our negative (and print) wallets.

The wallet has been produced by Kodak and our local photographer and processor has been able to over-stamp it with his name. So we know that inside were photos processed by Peter Francis. The envelope shows a black and white image of a girl swimming. It probably dates from about 1960.

Inside, the envelope has eight negatives and seven prints. All are of dogs and, it must be said, they do not look well exposed. 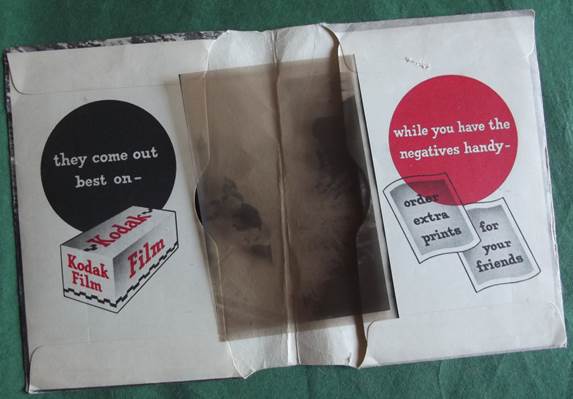 The wallet is used for Kodak adverts

Kodak has taken the opportunity to advertise their film and suggest that you might want to get extra prints made. People who have processed black and white film will note that the large format negative shown looks rather on the thin side. It’ll be hard to get a quality print from that.

The film was taken by Mr and Mrs Elisha. They are names that will be well known to regular readers of this blog, both being at the heart of village life in so many ways. 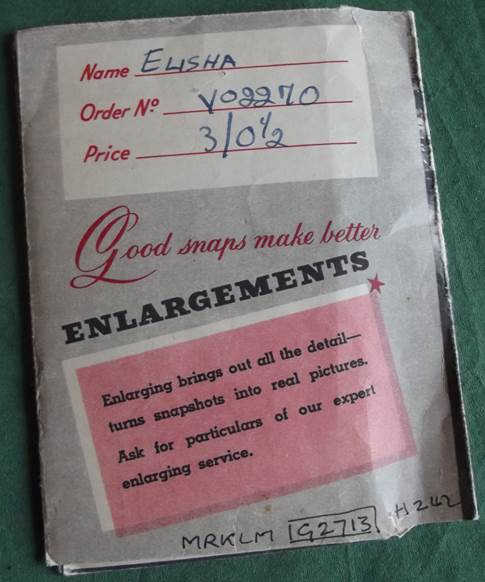 The customers were the Elishas of Market Lavington

The price seems very cheap for it is listed as 3/0½ – just over 15p in today’s money. That may be cheap, but these days we tend to regard photography as just about free. And we certainly expect it to be instant.

So the wallet is just a memory of a past time when, perhaps, people thought about what photos they were taking and shared them with just the special friends and family.