Piggy Ward deals with a ‘Customer’

During the first half of the twentieth century it was quite normal for village folk, in Market Lavington, Easterton and elsewhere, to keep a pig. The pig was the wonder beast for householders for it could grow on domestic waste and when the time came, none of it was wasted. Our curator says that as a tiny post war child, his family had a bit of ‘Aunt Nellie’s pig’ for their Christmas dinner.

Not everyone was up to the job of converting the live and kicking beast into the disgruntled and assorted meat it was to become. In the Lavington area a man known as Piggy Ward had this job. Today’s image is a postcard showing the Wiltshire custom of burning the pig with our very own Piggy Ward doing the honours. 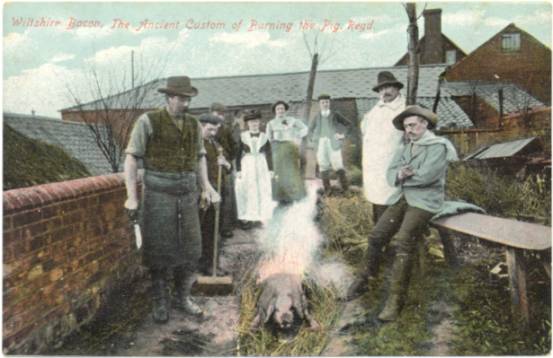 Piggy Ward worked from premises on the High Street in Market Lavington, next door to, or possibly a part of the present Post Office. Dave, who now runs the Post Office, says that the cellar has the look of having been a butcher’s, with run offs to carry surplus ‘liquid’ away.

The Wards had been butchers for some generations, in the Lavington area and elsewhere.

Piggy’s real name was William Ward and he had been born in Market Lavington in about 1854. His wife, Mary, was from County Kerry in Ireland. The 1901 census lists William as a slaughterman.

Back in 1861, when George was a just a little lad, his father, George Ward, was a butcher on High Street in Market Lavington.

Piggy was not the eldest son, and after being a member of the Royal Artillery in the 1880s, he had his own businesses elsewhere in the country. His son, George Ward, was actually born whilst the family were in Fleetwood in Lancashire.  This George, later became something of a luminary in Melksham, Wiltshire. The recently closed secondary school in Melksham – The George Ward School – was named after Piggy’s son.