We may not have seen much sunshine recently but Market Lavington has been lucky when compared with other parts of the country. We have had very little spring snow and, so far, we have avoided any power cuts. However, it has been bitingly cold, so it’s time to look at a happy time when people felt able to appear in summer weight clothing.

This photo dates from the early 1930s.

We do not know the event, but children’s plays like this were popular in those pre TV days. There are 16 girls, all dressed in the same fashion, and one other child dressed as a black bird of some kind. We have some of the names.

The four taller girls at the back are (left to right) Linda Shepperd, Sybil Baker, Gwen Phillips and Vilna Oatley

There are six girls standing just in front of the back four and they are unknown, Marjory Milsom, unknown, unknown, Vera Ellis and Rene Davis.

The bird has not been identified.

We have a copy of an original photo which had been folded – hence the line down the middle.

Let’s just pick on one of the girls – Gwen Phillips. 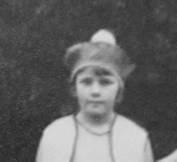 Gwendoline E Phillips was born in 1922. Her parents were Arthur and Emily (née Pocock). We have looked at their golden wedding before on this blog (click here). Gwen would have been raised at the former hardware shop, opposite the Co-op.

Gwen married a Mr Davis, we think in 1943. Their children had births registered in the Devizes area but, according to that 1970 Golden Wedding report about Gwen’s parents, The Davis family then lived in Calne.

As ever, we’d love to know more about the people in this photograph.