Many people contact the curator about aspects of the past in Market Lavington and Easterton. One such, recently, sought information about Police Sergeant Hillier. This person, a relative of the former officer, had heard that Sgt Hillier was killed in the course of arresting a criminal. We do not hold records of every resident of the village, but in this case we had been given some information and a photo of the policemen, albeit in his younger days. We were able to tell the person requesting information that the sergeant died from natural causes.

Arthur Hillier was actually from Highworth in North Wiltshire but it was the City of Salisbury Constabulary that he joined in 1895 and our photo of Arthur dates from that time. 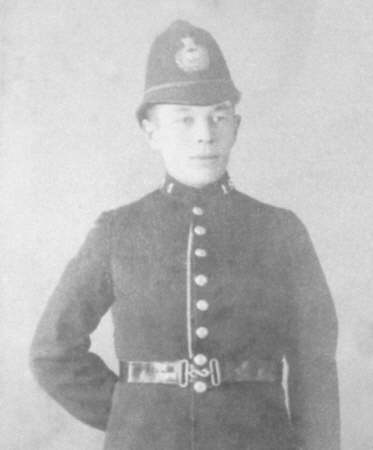 Arthur Hillier as a City of Salisbury PC – circa 1895

In 1897, Arthur transferred to the Wiltshire Police Force and was stationed at various locations around the county until being posted to Market Lavington at the start of 1915. He had been promoted to Sergeant in 1911.

Arthur Hillier’s stay in Market Lavington was to be a short one. The news cutting below was from the Wiltshire Gazette for 8th April 1915.