Many of the items we have in Market Lavington date from the nineteenth and twentieth centuries – with already a growing number from the 21st. We rely, totally, on donations and so this is not surprising. However, today we are looking at a now illegal item which probably dates from the 18th century. It is a device to discourage- or injure or kill – poachers. It is a flintlock spring gun. 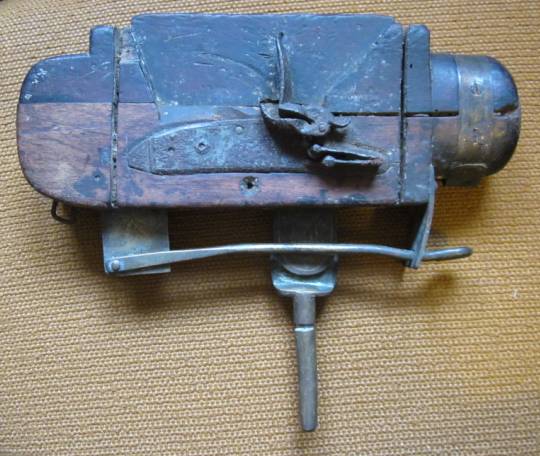 The idea is that the gun was loaded with charge and shot and then set up on the ground in a woodland area where poachers might be tempted to steal from the owner.

Wires led from the load under the very short barrel at about ankle height. Apparently, it was common practice to pass the wires through a candle flame to blacken them and make them less likely to show. When a poacher walked into a wire, the gun swivelled to point at them and the mechanism fired the shot. Being short barrelled, the shot spread out. The poacher may well have been maimed. lamed or killed.

It was a legal necessity to make sure potential poachers knew these items may be set so notices had to be displayed and town criers made public announcements. The idea was to warn off the miscreants, rather than to shoot them. Many poachers, though, did pay the ultimate price, probably for low Wages and hunger.

A big disadvantage was that the guns were not selective. They could not tell if a wire was tripped by friend or foe, human or other animal. There are many stories of these devices scoring a hit on the landowner or even his wife.

More can be read at http://la84foundation.org/SportsLibrary/Outing/Volume_41/outLXI06/outLXI06n.pdf an article about man traps and spring guns from a magazine- ‘Outing’ of March 1903.

This article has an image of a very similar gun captioned as a Very Old Type of Flintlock Spring-Gun. 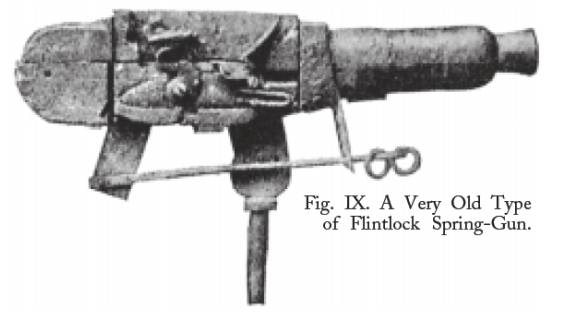