Probably not picking flowers at all!

Probably not picking flowers at all!

We are revisiting a picture we showed earlier this month – on December 5th under the heading, ‘Picking Flowers’.

This showed Bertha Moore, daughter of Samuel Moore, fruit grower and jam maker of Easterton and it looked as though she was picking flowers.

Here is that photo again.

Probably not flowers at all

We received information from Norman, another descendant of Samuel Moore who, first and foremost was delighted to find a photo and possible contact with a lost branch of his family. Norman reckoned the field the people were in was off White Street in Easterton. Norman had, in the past, talked to the present day farmer and had been told that this field had been used by the Moore family. 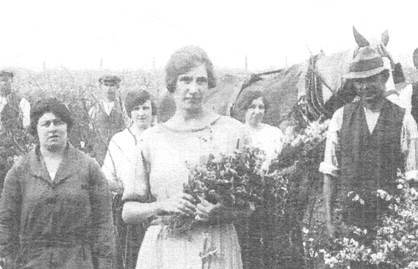 Norman also reckons they weren’t picking anything, but rather they were planting. The suggestion is they are blackcurrant bushes. At one time much of the fruit was grown locally. Samuel Moore had his own plantations and one of the trade names for his jams was, ‘Plantation Jam’.

We are always very grateful if people put us right so huge thanks to Norman for this information.