In truth we get many acts of kindness at Market Lavington Museum. I could start with well over 7000 items, all of which have been given. But most of these gifts have not been entirely random. They have been made by people with a close interest in our parishes.

But just sometimes, things arrive from out of the blue. One, recently, was Lady Warrington’s Mothers’ Union certificate.

Sometimes, people do random acts of work for us as well and we have received information from a genealogist as a follow up to our post about Sergeant Tarrant – a Daguerreotype photograph.

John has looked up the military record of a James Tarrant of Market Lavington. The conclusion he comes to, and we come to, is that it is not the man in the photo, but nonetheless it makes for fascinating information. 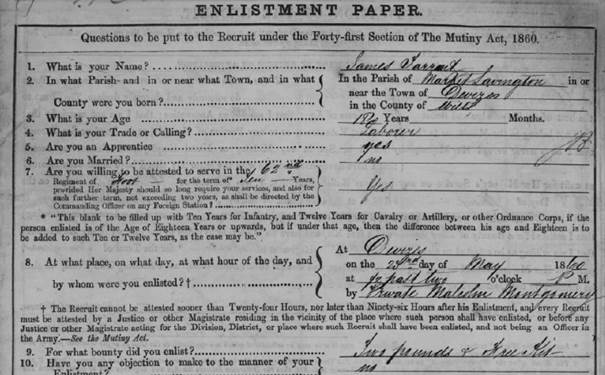 We can see, from this enlistment paper that James Tarrant of Market Lavington was 18 when he joined up on 23rd May 1860. His bounty was two pounds and his kit.

Enlistment papers give a brief description of the person.

A description of James Tarrant of Market Lavington

So we get a little picture of James who was 5 feet 4¾ inches tall with light complexion, hazel eyes and light brown hair. The height was about average for that time.

James joined the 62nd regiment of foot and enlisted for ten years. He was clearly of good conduct and never appeared in the defaulter’s book. He remained a Private throughout his military service.

In fact he served only about nine years and was released from service in 1869. The discharge papers say he was returning to Market Lavington but in 1871 he was a shop porter in Bath. We think he died, still a young man, in 1879.

We’d like to thank John for this real act of random kindness (not his first). We do always like to learn a little more about our local people, what they did and how they lived.

And of course, James may be related to Sergeant Tarrant as seen in the Daguerreotype.