Recorders at the museum in 1962

Well, what do readers expect from the title? Would it be serious people going around with clipboard, paper and pen, or maybe with cameras? Well it isn’t that at all, for in 1962 the museum building was in use as a part of Market Lavington School. No doubt, at that time the school was luxuriating in space, for Lavington Secondary Modern School had opened the previous year and students aged over 11 had moved to the new school (which is, of course, Lavington Comprehensive School now).

And the recorders were those old standbys of primary school music so what we are looking at is a photo of a couple of girls with their recorders. 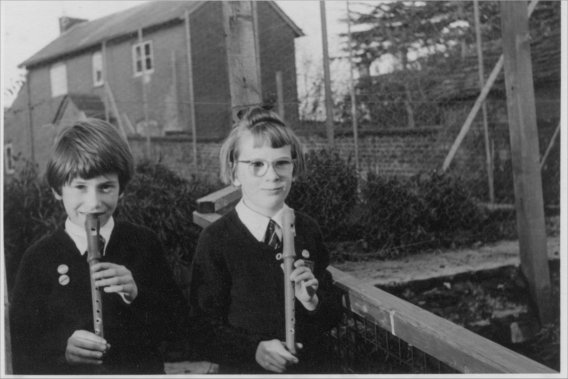 Sadly, we have no record of who the girls were. Can anybody help identify them?

Behind the girls is the building which is now the museum. It had been built in the 1840s as the home for the schoolmaster but soon it became a cottage for the gardener at ‘The Old House’ which is just behind our museum. For much of the first half of the twentieth century the Burbidge family lived in the cottage. Flo Burbidge was born there in 1908 and her sister Dorrie made the journey from the house to the adjacent church for her wedding in 1934.

By the time the Burbidges departed, in the 1950s, a home with no water, drainage or electricity wasn’t really acceptable but the school needed more space so electricity was laid on and the rooms were used for crafts, watching  schools TV programmes and as office space. A flight of steps was constructed from the school directly to the old cottage and the front garden was made into extra playground.

Then a new school was opened for Market Lavington and Easterton and the old school was closed, becoming a community facility. And eventually, the original schoolmaster’s house became the museum.