We have met members of the Burnett family before but today we’ll look at two young men in that Easterton family who fought for King and country in World War One. One of the lads returned. The other did not.

Henry Burnett married Beatrice Price, a local girl, in 1888. Their first child, Richard Charles, known as Charlie, was born the following year. Reginald Harry Burnett came next in 1891. More children followed, but it is those two older boys we look at today. Neither was born in Easterton but they spent much of their childhood there for Henry and Beatrice ran the village Post Office.

Charlie reached adulthood and joined the territorial or reservists. When war was declared in 1914, the local reservists with Charlie amongst them were sent off to India for garrison duty. This relieved regular, fully trained soldiers who could return to Europe and become front line men.

We have a photo of Charlie and others having a bit of fun. 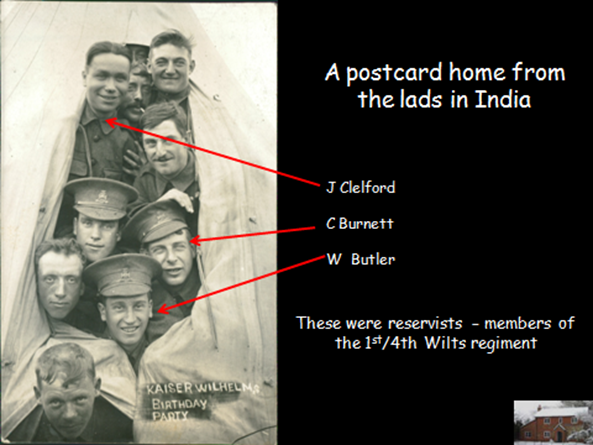 Charlie Burnett and others enjoy some World War One camaraderie

C Burnett is Charlie. We think it is fair to say that the lads had a fairly quiet time in India but many of them returned via Palestine in 1917 and the James Clelford named in the picture died of injuries sustained there.

We don’t have a full military history for Charlie, but we know he survived. For much of his adult life he was the wheelwright who worked for the Gyes. He died in 1958.

The story for Reginald does not have a happy ending.

Reginald was a baker – he probably worked in his parents’ shop and he was not an early volunteer. Feeding the folks back home was, of course, a very important job. He may have volunteered via the Derby scheme or he may just have been conscripted into the army.

We have seen this photo before on this blog but we’ll use it again as it shows Reg and the rest of the family. 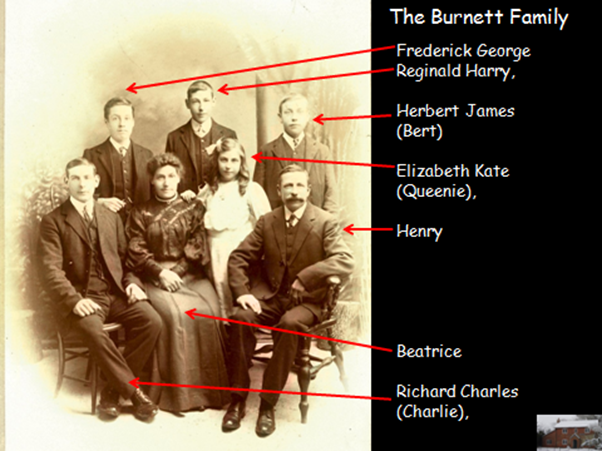 The Burnett family of Easterton

Reginald was transferred to the infantry and sent to the 9th Service Battalion Cameronians and while serving with them was wounded and captured by the Germans in France and made a prisoner of war. He died from his wounds on 7th May 1917 while in captivity and is now buried in Niederzwehren Cemetery, Germany.

His grieving parents put the following verse in the Memoriam column of the local paper.

From father, mother, brothers and sister