The restoration was carried out by Harriet James who still operates. Her web site is at http://harrietjames-sundials.co.uk/. What follows is her report. 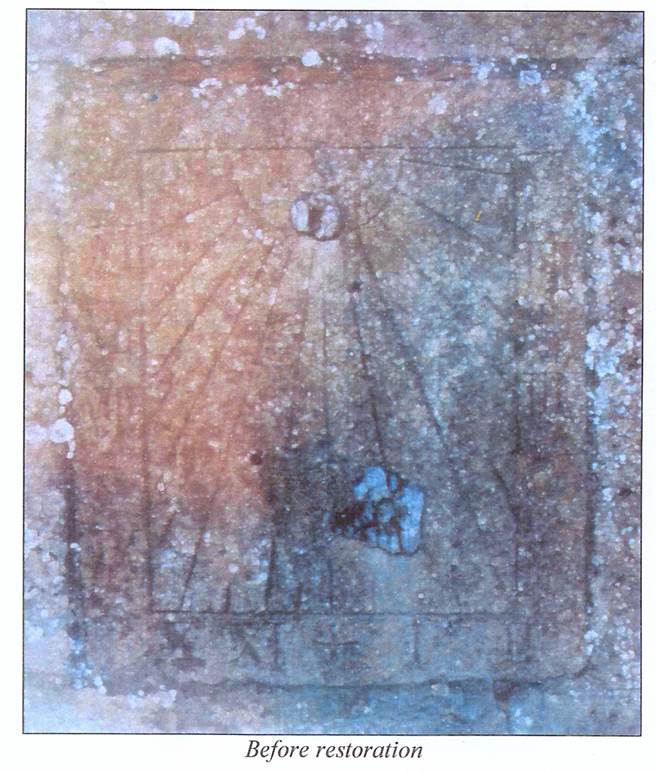 The sundial is set into the wall about 20ft from the ground, over the door of the south porch of the church. It is carved into a piece of shelly sandstone different from the local stone from which the church is built. The stone measures approx. 490 (w ) x 590 (h) x 50 (d) mm, perhaps 20″ x 24″ x 2″ originally.

The date of the sundial is unknown, but its layout and the shape of the numerals suggest that it is perhaps late 16th century, or 17th century.

The design of the sundial is a simple east-decliner reading local solar time. There are hour lines from 6am to 5pm and shorter intermediate half-hour lines, all in an inner rectangle 359 (w ) x 457 (h) mm (perhaps originally 14″ x 18″) with Roman numerals 1.75″ tall in an outer border.

The numerals and lines appear to have been carved in v-section although some of the detail is badly weathered. The numerals are quite well designed and carved with thin and thick strokes 1/8″ wide and W’-3/8″ wide respectively. Four is delineated as 1111 not IV. Noon is indicated by a cross. There was no trace of paint in any of the carved detail, but it was decided to paint the detail black to make the dial readable from the ground.

The dial’s gnomon is missing although there was one in existence within living memory. It was probably not the original as there were several lead and mortar-filled holes where there might have been a foot to the gnomon and various attempts at correct fixing had been made, including one attempt to make the sundial a west-decliner. 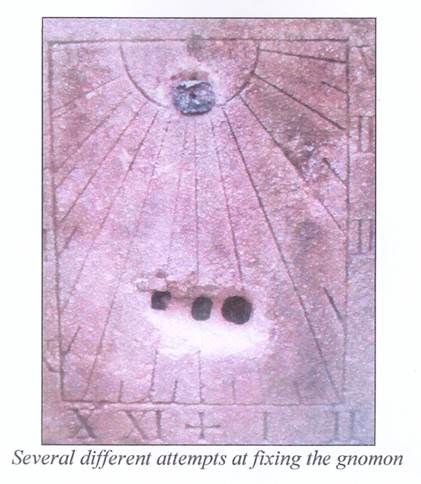 Embedded in one of the plugs of lead was the foot of an old iron gnomon W’ – 3/8″ roughly circular in diameter. This foot was not discovered until the restoration was underway, by which time the replacement gnomon had been made in 3/8″ square (not round) section brass bar.

There was a further rectangular hole in the stone within the semi-circle centred about the dial’s origin which must have been for another foot. A hole at the origin itself was filled with mortar. The new gnomon was designed to reuse the hole at the origin and a new hole for a foot was drilled in sound stone just above the site of the multiple lead fixings.

The declination of the sundial is 16° 52′ east of south. The latitude of the church is 510 I7’ N and longitude 10 58′ W. There are some errors in the layout of the hour lines. Some are at the wrong angle and not drawn accurately from the dial’s origin.

Carrying out the Restoration

The dial stone was cleaned with water to remove lichen. The lead plugs were removed from the dial stone. This was a difficult task as there is a hollow behind the stone and the end of the lead had plugs had dripped into it. The resulting holes were filled with a mortar to match the original stone. The missing segments of hour lines were scribed into the mortar while still wet.

Later the carved detail was tidied and painted with black signwriter’s enamel. A small iron clamp exposed near the bottom right corner of the dial stone was cleaned and filled round with new mortar as water dripping from it had made a hole in the original mortar. Otherwise the original mortar and segments of a very iron-rich orange stone (Guiting stone?) which had been used to wedge the dial into its niche were in very good condition.

The replacement gnomon was set into the stone with an epoxy stone glue. It was positioned so that the centre of its shadow lies along a line when it is the hour or half-hour local solar time. 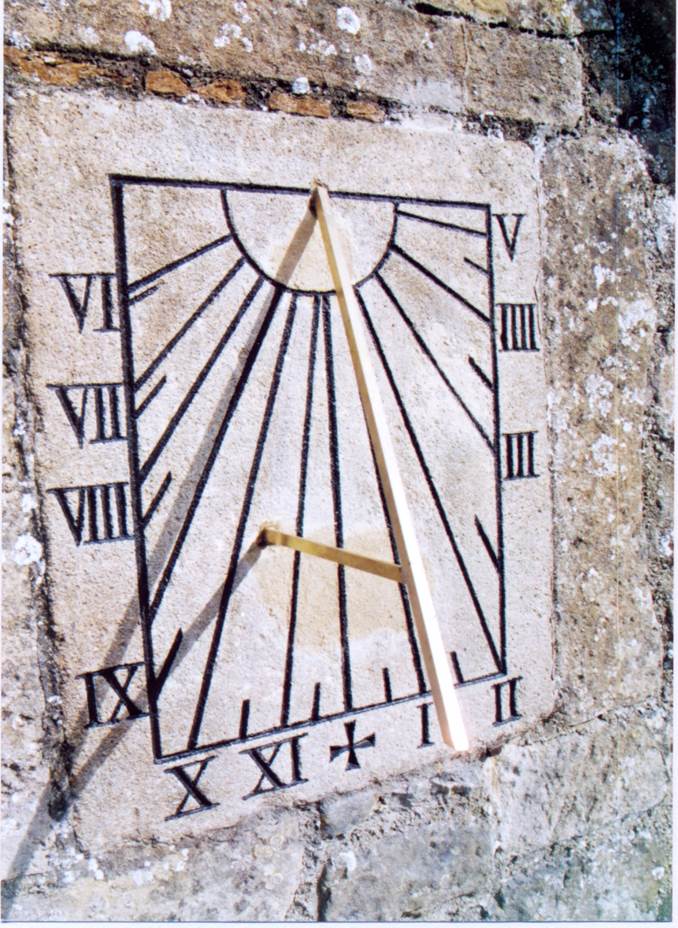