We have met the Reverend Mayow Wynell Mayow before on this blog but the other day a most unexpected email arrived with some sketches. The sender was requesting information about this Market Lavington vicar from 1836 to about 1860. It is known that the sketches were in a book of such drawings belonging to a member of the Mayow family. And here is one such sketch. 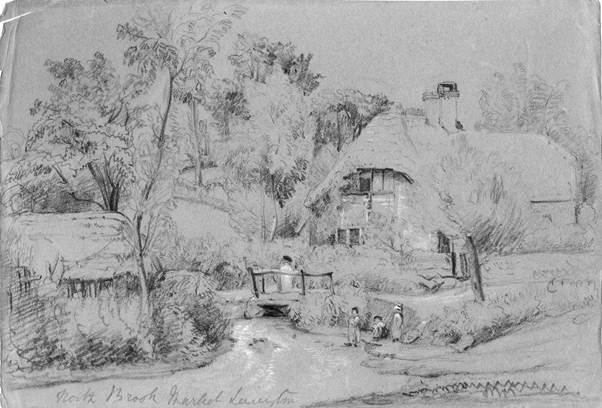 This sketch is located by the title on it.

So this is Northbrook in Market Lavington.

There is no clear signature. However, we do not think the writing is that of our former vicar for we can compare it against writing we have in a letter.

The capital M looks particularly different. So we are reasonably certain it wasn’t Market Lavington’s vicar who drew this image. It, and others, must be by  by a relative of his.

It is a lovely image and we’d like to thank Lido Vintage Images for making this and other pictures available to us. Quite reasonably, they retain copyright on a set of images they have shared with us. Their web site is at http://www.lidovintageimages.co.uk/

A final thought – the location is clearly by the stream we know as Northbrook. It is believed this picture dates from the 1830s or 40s and probably the buildings depicted were demolished before present living memory. We certainly can’t identify them.