Richard Park was born in 1841 to his parents, William and Rosanna. William had married Rosanna Cook in 1838 at Bradford on Avon. Richard’s birth was recorded in the first quarter of the year so it’s a real shame that the 1841 census has not survived for we’d have known whereabouts he lived within Market Lavington at the time of his birth. As it is, we can’t catch up with Richard until he was aged ten, in 1851 when the family lived on Northbrook.

By then, Richard’s father, William was aged 45 and earned his living as a tailor. Mother, Rosanna, was 46 and both parents had been born in Market Lavington. Richard, aged ten, was the oldest child at home. He had a younger brother, James, who was five. Both Richard and James were scholars.

In 1861 Richard is described as a tailor. He still lives on Northbrook with younger brother, James. A note on the census says, ‘H Absent’. I’m not sure what the H means but I imagine it means parents for Richard is recorded as a son.

Richard married Ellen Honey in the spring of 1867. The marriage was recorded in the Devizes district.

In 1871 the census transcriber has given Richard the surname Kirk but it clearly says Park. Richard, the tailor lives with his wife, Ellen and children William Henry, aged 2 and Charles David, just a month old, at number 5 Stobbarts Road. This census tells us that Ellen came from the village of Stanton St Bernard, up the Vale of Pewsey.

In 1881 Ellen was away and Richard, the tailor, was living with his two sons. This time the address is given as number three Stobbarts Road. Ellen was staying with George Pearson and family in St Pancras, London. George was a Market Lavington man by birth as was his one year old daughter. A second Ellen Park, aged 7 is also in the house – so Richard and Ellen now had a daughter as well as the two sons.

By 1891 Richard and Ellen had moved to the High Street – not so far from the Vicarage which is now the nursing home. As in 1881, Ellen gives her place of birth as Devizes. Richard is still at work as a tailor and the only child at home with the couple is Alice, aged six.

In 1901, Richard reached the age of 60 and Ellen was 57. Alice, with middle name Gertrude was still at home and a visitor at the house was a twenty year old son of the Pearsons – the family that Ellen had been staying with twenty years earlier.

Richard died on January 11th 1909 and was buried in Market Lavington churchyard on the 16th January with the Reverend Sturton officiating. 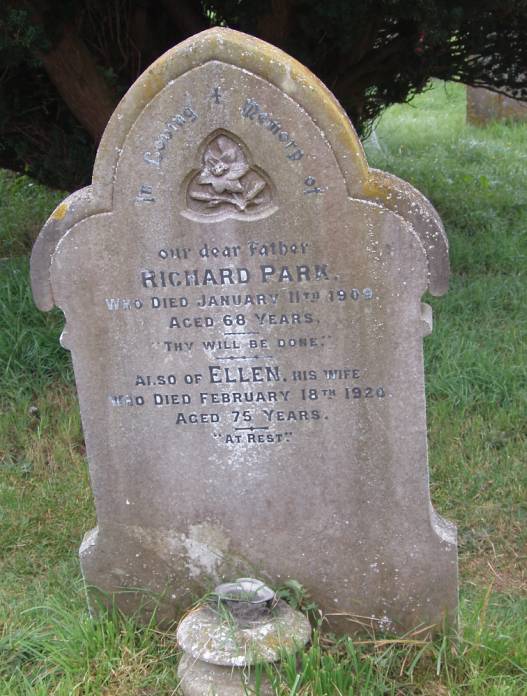 Grave of Richard and Ellen Park in Market Lavington churchyard

In 1911 Ellen was still on High Street with single daughter, Gertude aged 26. They had a house with 5 rooms. This time, with Ellen writing the census herself, she gives her birthplace as Stanton St Bernard. She had filled in that she had four children, all still living.

Ellen died on February 18th 1920 and joined Richard in the churchyard on the 23rd of that month with the Reverend Sturton, again officiating.