Market Lavington’s Roman heritage came to the fore when the Grove Farm estate was under construction although earlier excavations had certainly hinted at a Roman past.

In Easterton, the evidence for a villa estate dates from the Victorian era. Archaeologists may not always agree so you can take your pick from two versions of the same evidence available on line.

The following extract is from Wikipedia at http://en.wikipedia.org/wiki/Easterton

The rich soils may have been exploited many centuries before the surviving evidence of settlement, but Easterton, unusually among plain-edge villages, is the site of a Roman villa estate, known from stray archaeological finds in the area of Kestrels in Oak Lane, west of the village. This may be linked with a mid 4th century Roman coin hoard, discovered in an urn during the Victorian era and dispersed, although some coins passed to Devizes Museum. Another possible Roman site, deduced from place-name evidence, may lie at Wickham Green on the boundary with Urchfont some 2 km north of Kestrels.

This is from the Wiltshire County web site at http://history.wiltshire.gov.uk/community/getcom.php?id=87

In the middle of the 19th century, an urn was excavated somewhere in Easterton which held Roman coins from around 350 AD. However the coins were sold and where the urn was dug up is not known. In the 19th century a trench was dug in the grounds of Kestrels, a large red brick house which was at that time owned by a Doctor Lake. Within this was found a skeleton and some Roman pottery, so it seems that there was some form of Roman occupation in the area at the start of the 1st millennium.

At Market Lavington Museum we have a piece of Roman tile that was found near Kestrels (named by Ben Hayward who lived there in the 19th century. He was keen on falconry). Our tile is part of decorated Roman blue tile, considered to be associated with Roman wall-plaster  and is regarded as evidence for a high status Roman Building. 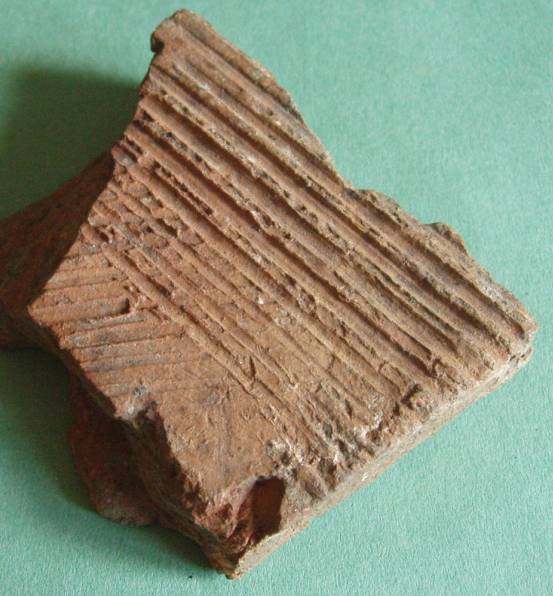