A recent enquiry brought Roseleigh School to our attention. We have to confess to knowing nothing about it.

I don’t know if you can help with this, but I am doing some research into my grandfather (Frederick Sebastian Wrench) who was born in 1900 and was at Roseleigh School in Market Lavington when he was 5 years old.

The enquirer even drew our attention to a small news ad we had. This is it. 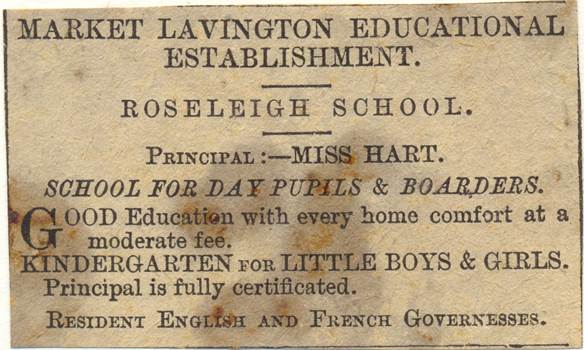 This was published in the Wiltshire Advertiser for November 26th 1906. 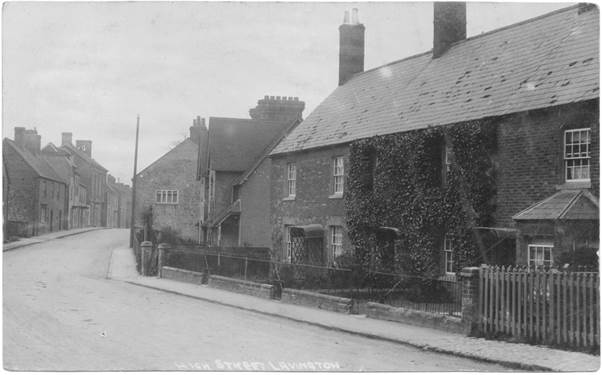 All sorts of questions were raised by this, some of which we can answer.

Where was Roseleigh? Well actually, where is Roseleigh? It is an end of terrace house next door to the Old Police House in Market Lavington. If this was the school, it seems quite small to be able to take boarders and have resident governesses. This postcard, which may date from the right era, shows the building.

Roseleigh is roughly in the centre of the picture – the left hand end of the terrace. The Police House was the next one heading up the street.

Roseleigh does have quite extensive outbuildings – two storey ones so maybe these were in use as accommodation or even school rooms.

Miss Hart would seem to have been Alice. She was a Londoner by birth, born around 1856. By 1881 she was with her parents in Market Lavington and described as a school mistress. By 1891 she was said to be retired. Her father had died by then. In 1901 Alice was a visitor in Woodborough described as a school teacher. It is quite irritating for us that she was away from home for census night. We don’t know where she lived. But we can guess that the family money had run out and she’d had to return to work again.

But we don’t know when the school opened or closed again, who the governesses were or, indeed, anything else about this school.

Can anybody out there help us?