Back in 1958 a student teacher came to work at Market Lavington School. Her name was Rowena and as a part of her work she kept a record of her activities – a village survey.

Rowena, who was a student at Bath, passed out of the life of the village after a month. But she was always remembered by Peggy Gye, our museum founder and long term curator. A dozen or so years ago, Rowena’s village survey arrived at the museum, via the WI. There was an address on her folder, but it did not lead to Rowena – presumably an old address.

Some three years ago, one of our stewards, holidaying in the north west, came across Rowena working as a volunteer at Silloth Lifeboat Station. It is on the Cumbrian Coast some 22 miles west of Carlisle. Another steward recently decided to give the lifeboat station a call and so now the museum is back in touch with Rowena.

It seems a good time to introduce some of Rowena’s work on this blog. This comes from her second day at the school and village – 26th September 1958. She was learning about the village, visiting the church. 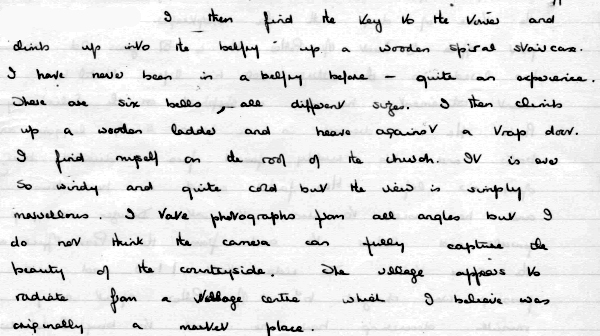 From Rowena’s record of her month in Market Lavington

So, Rowena found the key to the church tower and clambered up, past the belfry and right out onto the roof. From here she took photographs and some of these found their way to her survey.

Let’s look at one of them. 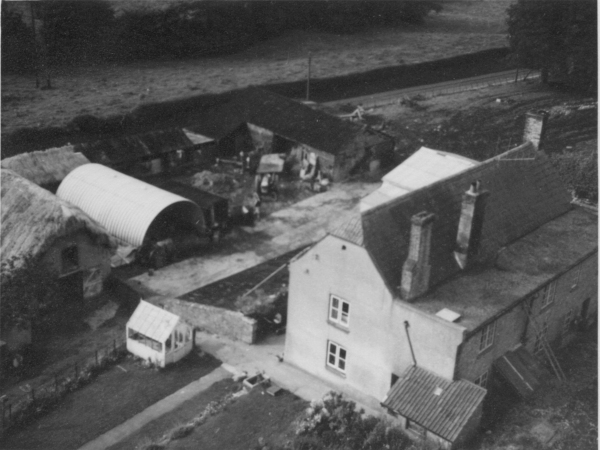 Rowena was looking down on Grove Farm which was then the home and workplace of Ron and Fran Francis. This is a view which has entirely changed. The Grove Farm land now has housing and the farm site is now occupied by our wonderful Community Hall and associated car park.

Back on that date in 1958, the house was all there with a neat little greenhouse in the garden. The corrugated iron ark building looks shiny and new. It is surrounded by older buildings, mostly with thatched rooves. The yard has the look of many a farmyard – untidy but in use.

Rowena was unsure of the capabilities of her camera. But her photo here is unlike any other we have from the church tower.

The next day – Friday 26th September, 1958 – Rowena collected some information from Fran Francis. 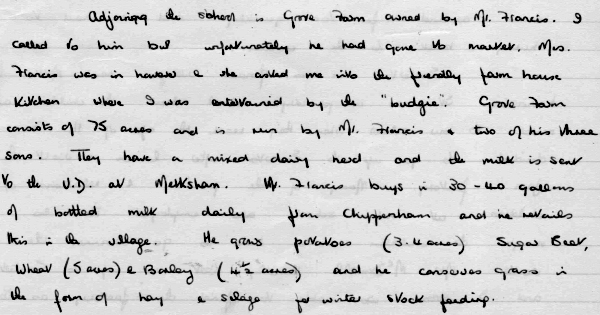 More about activities at Grove Farm, Market Lavington in 1958

Adjoining the school is Grove Farm owned by Mr Francis. I called to him but unfortunately he had gone to Market. Mrs Francis was in however and she invited me in to the friendly farm house kitchen where I was entertained by the ‘budgie’. Grove Farm consists of 75 acres and is run by Mr Francis and two of his sons. They have a mixed dairy herd and the milk is sent to the U. D. (United Dairies) at Melksham. Mr Francis buys  in 30 to 40 gallons of bottled milk daily from Chippenham and he retails this in the village. He grows potatoes (3.4 acres), sugar beet, wheat (5 acres)  and barley (4.5 acres) and he conserves grass in the form of hay and silage for winter stock feeding.

Thanks, Rowena – your time in Market Lavington, more than 50 years ago, provides us with information, not only about the school, but also about many of the village activities at the time.