1953 was firmly in the black and white age as far as photographs and TV were concerned. It was in about 1960 that some adventurous photographers began to take colour slides and these stayed popular for twenty years or so. (And a reminder that we have the capability to copy your slides at Market Lavington Museum). Many people bought their first colour TV for a royal event – the investiture of Charles as Prince of Wales in 1969. We have no record of any public celebration of this event in Market Lavington.

1977 saw our Queen’s  Silver Jubilee. This was celebrated big time in Market Lavington with whole village events and smaller street parties for specific areas of the village. These are remembered in a mix of colour and black and white images.  A few of these pictures are on display in the kitchen at Market Lavington Museum. 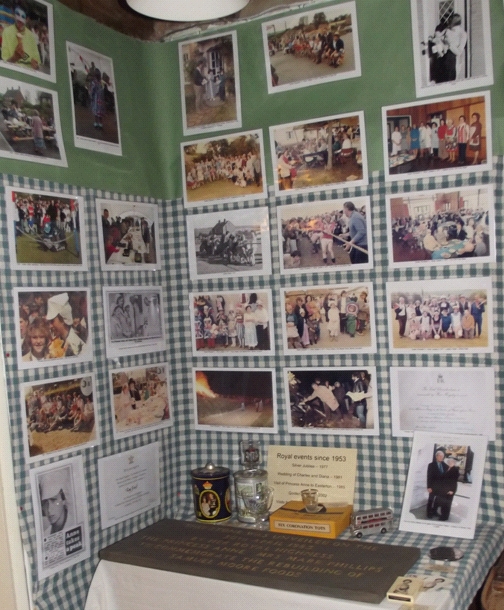 The sharp eyed will recognise that this display also shows other events. Princess Anne visited Easterton in 1985 to open a big extension to the jam factory. We have photos taken by locals and for the national press on display here. Then, in 2002, there was a Golden Jubilee celebration. We remember that as well. We also have memorabilia associated with local people who have visited royalty for one reason or another.