Prior to 1874 Easterton was a tithing of Market Lavington although it maintained its own, separate provision for the poor.

Some might say that the real beginning of separate parish status for Easterton began in about 1865 when the Hon Louisa Hay of Clyffe Hall in market Lavington provided  money for a school in Easterton. This became used jointly as a school and church. Easterton became its own ecclesiastical parish when a new church was ready. It became a separate civil parish soon after.

In 1875 St Barnabas Church was officially opened and in 1876 a new National School was completed.

The consecration of the church was on 10th June 1875. Easterton held a celebratory gala with a speech by Dr Hitchcock, the churchwarden. Perhaps Dr Hitchcock showed some of his religious magic lantern slides.

A centenary event was held in 1975. Pictures of Easterton’s fire engine at this event have featured on this blog. 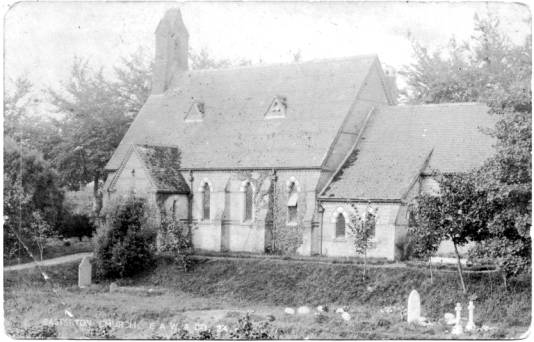 Our postcard of the church was published by A. E. W. and Co. It dates from the early years of the twentieth century. Since then the vestry has been extended and a room for a Sunday School has been added.