It is more than two years since we featured a letter from Samuel Moore of the Easterton Jam Factory, to his son Wilf who was serving in France during World War 1. Here we have another. 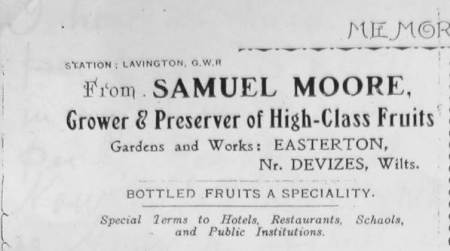 Samuel used his company notepaper and here’s who he was sending to.

Like the previous letter we showed, the date looks like 1915, but we are sure Samuel actually wrote 1918. In the letter, Sam refers to Sunday August 18th as a date on which he was writing. That was in 1918.

The start of the letter

Dear Wilfrid I have received your last card & letter and am pleased to hear you are getting on alright. I have had so much to attend to that I have not had time to write to you. Our business has grown to be a very large one. And fruits are very scarce & dear. I have been having a lot of fruit from Hampshire this year. Now everything about here is all different to what it was when you were here. But with all the changes our business of jam making is the best. You can make jams day and night and sell them. I have the large boiler fixed and am putting the building out in line with the front door. I should have said the government fixes all the prices for fruits and jams.

I have had to leave this letter unfinished until this day Sunday August 18th. Since then a great deal has happened. I am now taking fruits and ??? from what is known as the Wiltshire Fruit and Vegetable ???. We are having a lot of blackberries through them at 3d per pound. There are scarcely any apples this year. They are 6d per lb. And plums are not less than 3½d per lb. I have 4 cases of oranges at 50/- per case – 10d per lb – and am using them in my new preserve at 7½d per lb. People rush for it.

Now all that is wanted in the business is money to extend it.

I have plenty of offers but I would rather be my own master.

Percy Webb – he is just leaving as he will have to join up. ??? Clelford – she works for us constantly.

The rest of the letter is not clear, but for those who would like to try to decypher it, here it is. 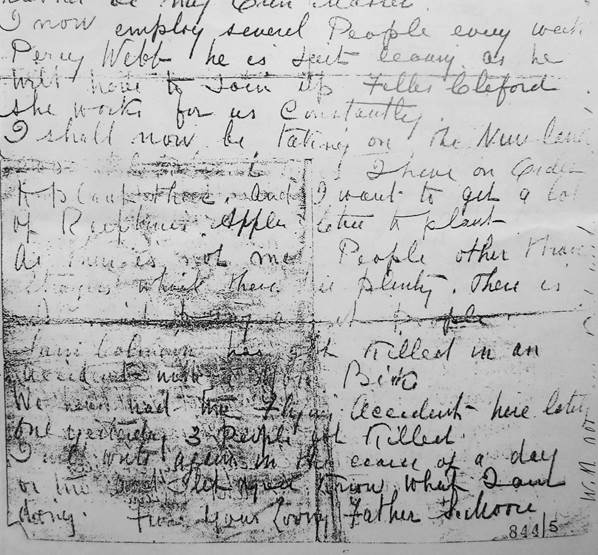 The sign off is ‘your loving father S. Moore’.