No we haven’t lost Ivy Dean, a person, but rather Ivydene a property in Market Lavington. It appears to have gone missing and several people are after it. We, at the Museum, have found this vanished property to be one which clearly has an interesting past. We ought to know about it.

Amongst the interesting items in the past are that Mr Fred Sayer may have lived there and certainly had a bus garage there. Fred ran the Lavington and Devizes Motor Services during the interwar period. He’d have needed substantial premises for his fleet of vehicles for he claimed he could transport parties of up to 600 people in his own vehicles. People researching local buses are very keen to know more. Then, it seems that Ivydene was the headquarters of 483 battery of the 82nd Searchlight Regiment. This, of course would have been during World War II.

Our knowledge at the museum is limited.

The 1926 electoral roll gives only limited addresses, but has Fred and Mabel Sayer living at The Terrace.

The 1939 electoral roll shows Lawrence William Couling and his wife Katherine at Ivydene.

In a 1954 directory we have the following:

A 1966 directory tells us that Nellie E Saxton was at 3 Ivy Dene and M V J Hazel was at number 2, Ivy Dene.

Asking villagers with memories to stretch back far enough seems to suggest that the properties on the card below, believed to date from around 1914 and captioned ‘The Terrace’  may be Ivydene. 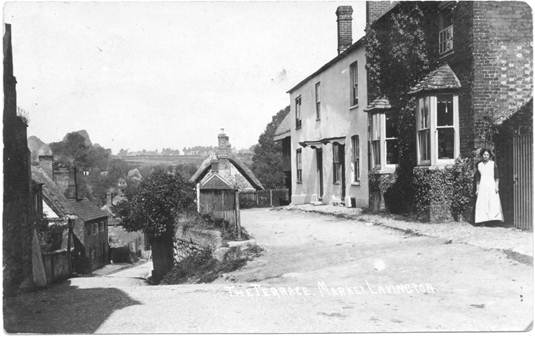 The Terrace, Market Lavington. Could these properties be Ivydene?

In this image we see Northbrook – heading off downhill on the left and The Terrace on the right.

But we are not yet certain that these houses became or ever were Ivydene.  It is felt that the Searchlight Battery would have required larger accommodation than this row of cottages. And Fred Sayer had a large business. Wouldn’t he have had a grander home?

We are fairly certain that Fred Sayer had sheds for his buses behind these properties. Doubts remain, though. Maybe recognising the lady outside the near end of the houses would help. 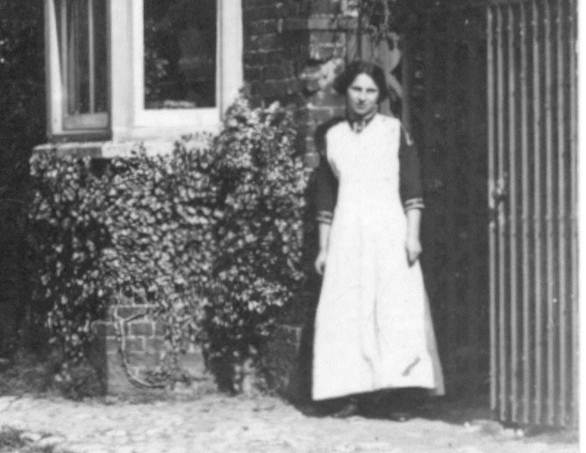 Can anybody identify this lady who could be a clue to finding Ivydene, Market Lavington?

Do please get in touch if you can tell us any more about Ivydene, Fred Sayer and the bus company or the Searchlight battery HQ.