This post is really about Market Lavington photographer, Alf Burgess. Alf was not only a photographer, he was very much a business man and he always had thoughts on what would make money.

The summer camps that territorial regiments held, up on Salisbury Plain, were clearly a chance to make some money for Alf. These camps were like holidays with training for the men. They had left parents, wives and sweethearts back home for a week or a fortnight. They needed to write home and what better than a postcard which showed them or maybe their camp.

Many of Alf’s photos are of Pond Farm Camp which is above Easterton. Today’s photo may not be taken within our parish for it bears a postmark of West Down North. This camp was within spitting distance of the Drummer Boy Post which is in the parish of Market Lavington but the camp itself was just outside.

Let’s look first at the back of the card. 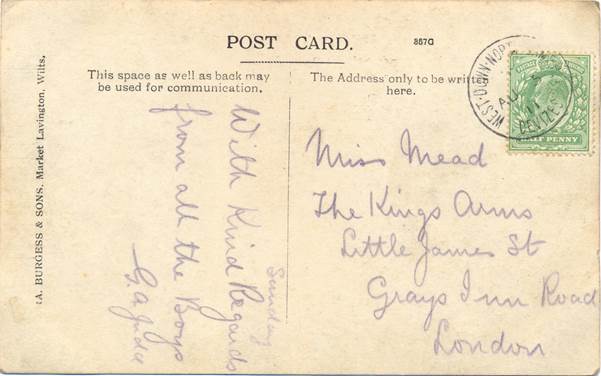 Card sent from West Down North Camp in August 1911

It says very little, but we can see the postmark. The card was sent on August 5th 1911.

We can also see that the publisher has credited himself on the card.

It is interesting to note that even by 1911 Alf was crediting his sons as part of the business.

And now to the picture which shows a collection of sergeants relaxing on the bleak downland which is Salisbury Plain. 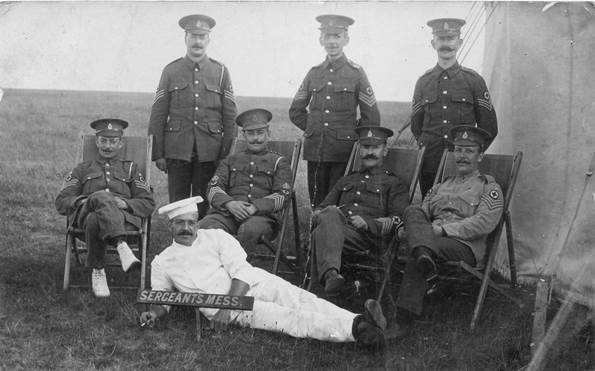 The front of the card shows a group of sergeants

Apart from the chef they all have a cross on their arms, above the stripes. Presumably these could be medical NCOs. 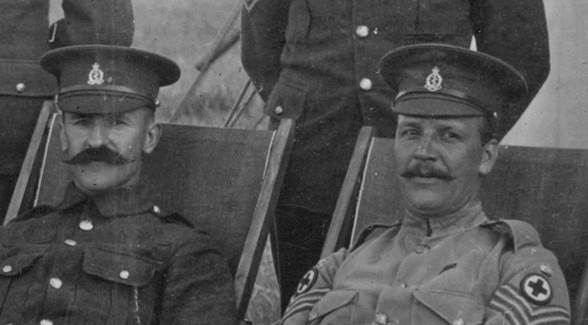 They appear to belong to the Royal Army Medical Corps

The cap badges certainly look like those off the Royal Army Medical Corps.

But now let’s think of Alf Burgess, or his sons. Transport for them was the bike. To take the photo the hefty equipment of the day would need to have been lugged up Lavington Hill and then taken some three miles across the rough, rutted tracks to the far reaches of the parish, and then just that bit further. With pictures exposed the whole set of clobber would need to get back down to the Burgess premises on High Street in Market Lavington for the dark room work – developing the exposures into negatives and then printing off each image as a postcard. Perhaps these were then hauled back up to the army camp to effect actual sales. Or, maybe, soldiers were able to escape to purchase their images at the shop and also sample the bright lights of Market Lavington.

It’s a far cry from life 100 years on. These days photos like the one above would have been taken on somebody’s smart phone and almost instantly posted so that friends, family or, indeed, anybody could see it, all over the world.