Sheep and Lambs at Lamb Corner

Today we remember 1950 – sixty years ago so within the memory span of many people from the older generation.

And we also feature, for the third time in recent weeks, Lamb Corner. Lamb Corner is an old name for the crossroads in the middle of the village where High Street, White Street, Church Street and Parsonage Lane all meet. It is believed that a building on the corner, demolished to improve visibility for traffic, may once have been an inn called The Lamb.

Agricultural traffic in the village, in 2010, consists of large and powerful tractors and machinery going from one place to another, or maybe trucks and wagons taking livestock from one farm to another location. Back in 1950, the overall scale of farming was much smaller and animals, equipped with legs, were expected to be able to walk from place to place. 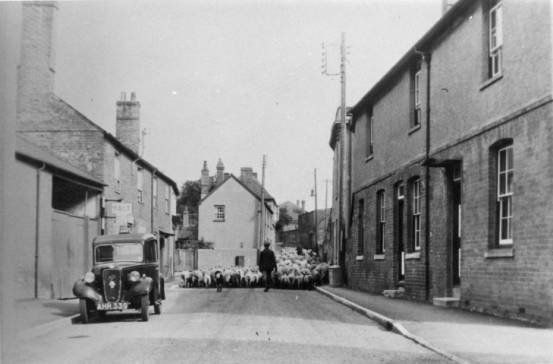 Sheep at Lamb Corner - a photo at Market Lavington Museum

In today’s photo, sheep are being moved from summer grazing on Salisbury Plain and they are making their way to West Park Farm (which is by the railway bridge at the bottom of Ledge Hill) so that they can be fed more easily in the winter months.

We are looking down White Street towards the crossroads. The sheep are going straight across the crossroads – Lamb Corner – and heading up Parsonage Lane on their long walk to West Park Farm.

The cottage, which may have been The Lamb, stood on the left hand side of Parsonage Lane as it joined Church Street. This is where the telephone box now stands. In 1950, the phone box, which would have been vital since most people did not have their own phone, was in the Market Place. 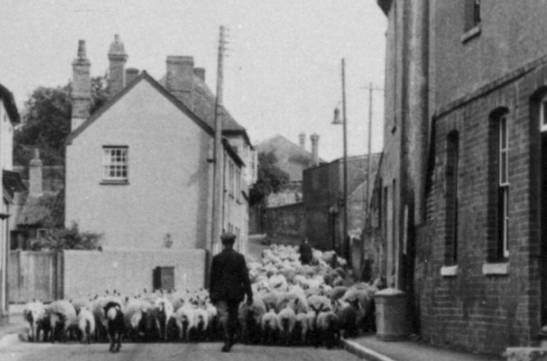 The lost cottage site is in front of the white wall

Traffic would have been much lighter in 1950 – just as well since all four roads through the village were blocked by these sheep. 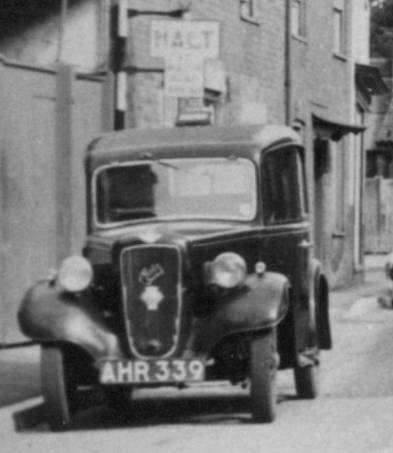 An Austin 7 on White Street

The car, which sports an AA badge on the radiator is (we think) an Austin Ruby 7 and dates from the late 1930s The HR on the registration plate were letters used for cars registered in Wiltshire. Of note is that there is just one windscreen wiper, on the driver’s side and a pair of hinges at the top of the windscreen, which allowed the front window to be opened.

The ‘Halt at Major Road Ahead’ sign, above the car roof is a real blast from the past. We trust the sheep took note!