So what did you receive at Christmas?

Christmas is always said to be a time for giving and receiving. At Market Lavington Museum we are pleased to receive gifts at any time and some have arrived over the Christmas period – both in terms of actual items and information that arrives over the airwaves.

We received the news – not so welcome – that former Market Lavington resident and teacher Sybil Perry died in November. Sybil had already given items to the museum with a couple of books of her memories and also some tape recordings. One of these is about how to build a good dewpond, for Sybil had the blood of the Smith family running through her veins.

But most folks knew her as a fantastic teacher. This tribute to her was sent to the curator.

It was with great sadness that I learnt of the death of Mrs Sybil Perry. As you must be aware, Mrs Perry was a teacher at the old and new primary school for many years, teaching many generations of Market Lavington children.

In my opinion, Mrs Perry was everything a teacher should be and as such she had a huge impact on my life. She obviously loved children, although I am not sure she realised how much she actually did for them. A strong believer in discipline, her lessons were lively, fun and informative. Our favourite trick was to get her “talking”, once started she would keep us enthralled with stories of her childhood and her family for hours.

She will be remembered with great fondness and one of my deepest regrets is that my own children were not able to meet this remarkable woman who played such a pivotal role in my life.

At the museum we had been considering adding a tribute to Sybil’s memories – that seems to fit the bill perfectly so a big thank you to Lea for sending it.

Another gift over the airwaves has been some information about a man we described as almost unknown, despite his thirty plus years as vicar of Market Lavington. I refer to Reverend John Sturton. A nephew of his wife has been in touch. This was a man who stayed with the Sturtons for some months back in the 1930s. Perhaps his information explains why we who never met him can’t really discover what our vicar was like.

Some months of my early childhood were spent at the Vicarage in Market Lavington, while the house that my father had bought on his retirement from the China consular service was being re-built.

John was a quiet man, and I hardly had any conversations with him. During the years 1933 – 1940 we often used to drive over to Market Lavington to visit John and Iva (Mrs Sturton), and often we all went out somewhere into the countryside for a picnic. John gave me a pocket Bible as a christening gift, which I still have and refer to. He also gave me a silver spoon, a copy of a Roman era spoon.

Thanks to Malcolm for that – and we look forward to receiving some photos when time permits.

A third gift of information arrived in the Christmas post. This is a family tree relating to Sam Rumble. We’ve met Sam before on these pages – the local traction engine driver who went off to Liverpool as an employee of his distant relatives in the Box family.

Perhaps it isn’t surprising to find that the Rumbles are linked to the Sainsbury family. Sainsbury is one of the commonest names in the Lavingtons. 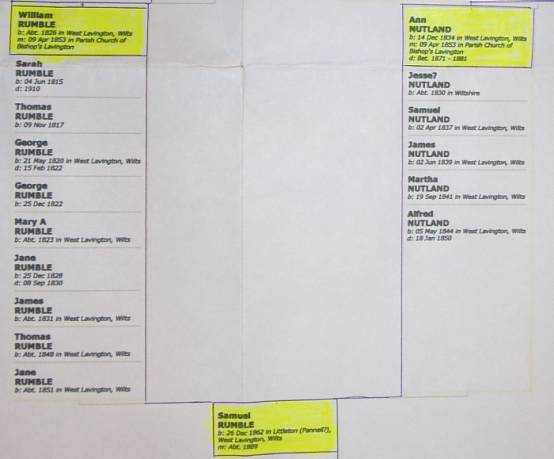 This bit of the tree shows Sam and his parents highlighted in yellow with all of his aunts and uncles.

Thanks very much to Derek Rumble, Sam’s grandson, for sending this information..

Let’s have one last ‘airwave’ Christmas present to the museum. This is a response to the recent entry about Rose Polden.

I see from your blog that you have the story of Harriet Rose Polden. I have done a bit of research and have found the link with the Smiths. Rose’s (aka Harriett) parents were Charles Polden and Jane Scratchley who married in 1888. On the 1901 census she is staying with a Mary A Smith. Mary Smith was married to Jacob Smith and her maiden name was Scratchley. So Rose’s mothers and Mary were sisters. Mary Ann Scratchley had married Jacob Smith in 1879 in Devizes registration district.

Then I found that Rose married Andrew J A Poolman in 1914 registrations district Devizes. They had 2 children that I could find Edna M Poolman 1920 Devizes and Roland C Poolman 1927 Registration district Warminster. May be these are 2 off the children in the picture??

On the 1911 census Rose is down as a dressmaker and an employer at age 19. She is still living with Jacob and Mary Ann Smith her Aunt and Uncle.

Big thanks to Bev here for doing the research for us.

What lovely information the museum has received over Christmas, albeit some of it stemming from a sad death.

At the museum we love receiving information, which can become a part of the history of our wonderful parish. It doesn’t need to be Christmas for us to enjoy such bits of local knowledge.