Some history of The Volunteer Arms

The pub known as The Volunteer Arms used to stand on Church Street, just around the corner from Parsonage Lane.  Back in the late 70s there were four pubs in Market Lavington but the old ‘Volley’ was the first of these to go almost thirty years ago. Here we present a short written account of some earlier history of the pub.

This Public House was once owned by Mr Thomas Potter who died as the result of an accident on Ledge Hill, Market Lavington in 1848.

The property then came to his son, John Potter, who eventually sold it about 1864 to his step-mother Mrs Jane Potter who lived there till about 1876 when the house was sold to Messrs Wadworth, Devizes. Till this time the beer was brewed on the premises. 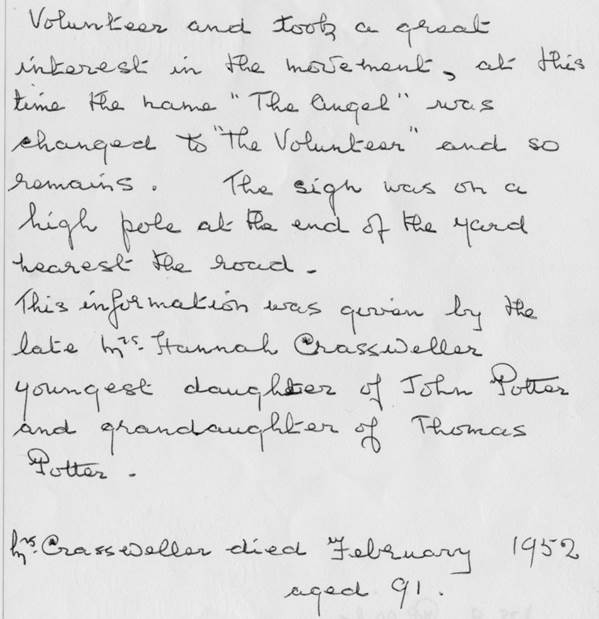 …Volunteer and took a great interest in the movement, at this time the name ‘The Angel’ was changed to ‘The Volunteer’ and so remains. The sign was on a high pole at the end of the yard nearest the road.

This information was given by the late Mrs Hannah Crassweller, youngest daughter of John Potter and granddaughter of Thomas Potter.

Which means her memories go back into the 1860s.