Some residents of Number 1, High Street

In recent years, Number 1 High Street has been the Post Office in Market Lavington but in times past it was a bakery. Today’s photo shows several of the people who lived there during the second half of the nineteenth and the first half of the twentieth centuries. 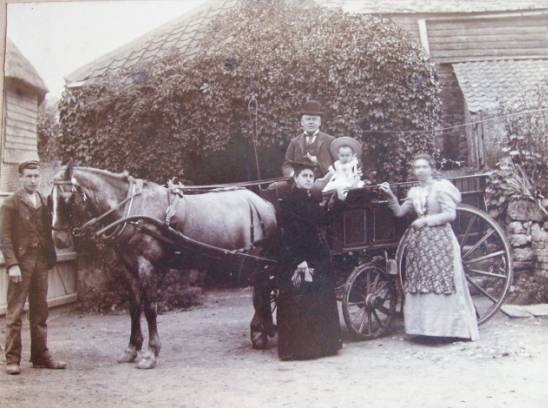 Walter James, Stephen, Sarah and Billy Cole and Susannah Sumner in the yard behind number 1, High Street - a photo at Market Lavington Museum

The people in or by the cart are members of the Sumner family. The Sumners took over the business in about 1860 and were in charge for more than 40 years. William, the baker, died in 1888, leaving his widow, Louisa, in charge. She remained the boss until 1905 when she, too died. It is the next two generations down we see in the photo. On the right we have Miss Susannah Sumner and the lady in black is her older sister Sarah. She was married to Stephen Eades Cole, the older looking man on the cart. Young William or Billy Cole is the baby perched on the cart.

Susannah, Sarah and Billy were all born in Market Lavington, probably at Number 1, High Street.

The young fellow holding the horse is Walter James. At the time this photo was taken, about 1895, Walter was almost certainly working for Louisa Sumner as a youthful baker. He lived, with his parents, just round the corner on Parsonage Lane and he still did at the time of the 1901 census. But by 1911 he appeared to be in charge of the business along with his wife, Elizabeth and young son who was also Walter.

The photo was taken in the back yard of number 1, High Street.

Walter died in 1943 but the premises remained a bakery into the 1950s.