Sonny Clelford seems to be well remembered in Easterton. People recall that he lived at Woodbine Cottage which had once been the home of Samuel Moore who set up the jam factory. Sonny had worked for ‘Plantation Jams’ which was once a name for Samuel Moore Foods.

We were recently given a photo of Sonny – not in Easterton but on a very crowded holiday beach. 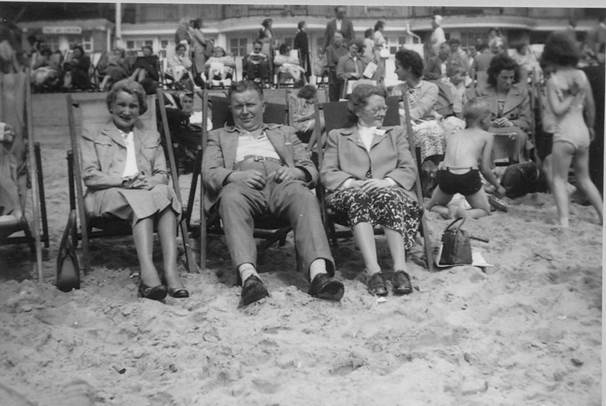 Phyllis Bulmer (left) and Mr and Mrs Sonny Clelford. All lived in Easterton at some times in their lives.

Sonny is the rather large man in the centre. His aunt Phyllis is on the left in the photo and his wife on the right.

Sonny’s real name was Albert Edgar Clelford. And he was born in 1908. On the 1911 census he was living with grandparents Henry and Emily in Easterton. We are not certain which member of the Clelford family was his parent.

Sonny married Olive Irene Nash in 1932. Her roots appear to be in the Chirton/Marden area. We do not think the couple had any children.

In 1939 they lived on High Street in Easterton but by the 1950s they were at Woodbine Cottage.