This is another advert found in the loft above Harry Hobbs’ shop on High Street in Market Lavington. His shop was opposite The Green Dragon and Harry ran the shop with his wife from the mid 1930s to the late 1960s. We think this ad probably dates from the 1950s but it could be earlier. 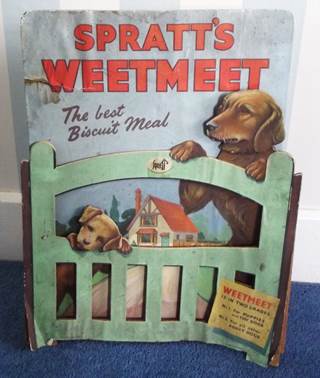 This particular advert – like the others it is cardboard – is not in tip top condition and it will need some TLC before it can appear in all its 3D glory. The gate is meant to be elegantly curved out in front of the backdrop scene and the cute dog and pup obviously come forward with it.

We have found little about the product advertised but we assume it was made at the company’s East London works. Once again, we’ll appeal for further information.