Spring Cottage is, as the name suggests, a cottage on the road known as The Spring. It is easy to find in 2011 for it is near the roundabout with Grove Road. The cottage was there in the 1880s when this picture was taken.

Our original photo, at Market Lavington Museum had suffered a little damage over the years and it has been digitally ‘repaired’ in this copy.

Our records tell us that the people in the photo are Mr and Mrs Pinchen. 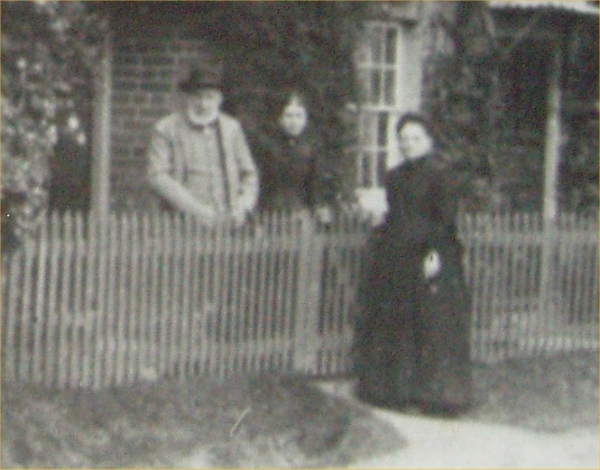 Francis Pinchen and Mrs Pinchen - but which of the ladies is it?

That is clearly not complete for there are three people standing at the garden gate.

We thinkthat either  Mr and Mrs Pinchen were the man and women on either side of the fence.  Mr Francis Pinchen had been born in about 1814 in Market Lavington and he was a builder by trade. His wife, Sophia, was a little older than Francis and hailed, originally, from Sheerness in Kent. The couple can be found on 1851, 61, 71 and 81 censuses at Spring Cottage.

Sophia died in 1884. Francis married Eliza Craske in 1885 in the Woolwich area. Eliza(beth) was almost 30 years younger than Francis.

The second possibility is that Mr and Mrs Pinchen could be Francis and his second wife, Elizabeth – and then she could be the lady standing next to him.

Francis died in 1902. He was buried at the Drove Lane cemetery in Market Lavington.