It’s easy to forget now that once upon a time and still within living memory, real people lived in Imber and carried on real and very normal lives. One of our postcards of St Mary’s Church was sent to a recipient in Imber so we see not only a part of our own village but also get a reminder of our lost neighbour. 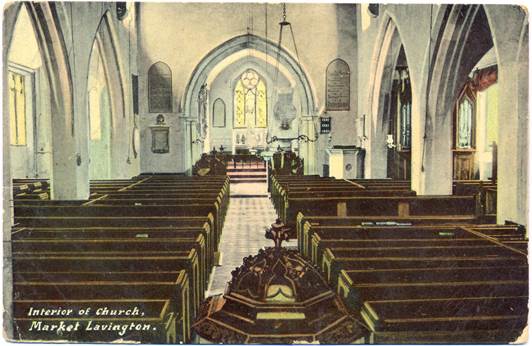 Lavington Church interior before the organ was moved

This is the village church here in Market Lavington in a colour tinted card. We know it is an early postcard because we can see the organ in its old place at the right of the church rather than behind the choir stalls where it is now. But actually, if you didn’t spot that this could have been a taken recently image for little has changed. The font cover, in the foreground is still the same. The pews haven’t altered. As is often the case the village church is unchanging or very slow to change.

Now let’s turn the card over.

We can see this was a Walton’s series card and it was posted in 1908 and it was sent to Mrs Meaden of 32 Imber. The message is what we’d send by text or some other electronic form these days. Annie is telling her aunt she’ll be home on Saturday evening.

We think Mrs Meaden was Anna the widow of Jack and that Annie, her niece was Annie Collins. But Meaden was about the commonest surname in Imber so we could be wrong there. But Anna Baker Meaden (née Sainsbury) was related to the Baker family who were white smiths in Market Lavington. Ida Baker of Market Lavington lived with her at the time of the 1911 census. She had become an Imber school teacher.