Mrs Redstone was the schoolmistress at Easterton. Holders of such posts are not always popular with the children and that seems to have been the case revealed here. But let’s first see where Lucretia Redstone lived – a lovely photo of a house in Easterton, just opposite the school or rather where the school once stood. 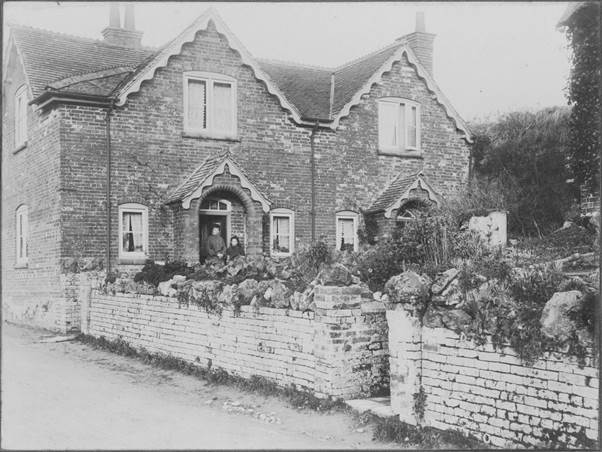 Sharp eyed folk will notice a couple of girls in the doorway. They are Mrs Redstone’s daughters, another Lucretia on the left and Mary on the right.

Mary was born around 1892 so this dates the photo to very early 20th century.

This, of course, has nothing to do with starched knickers. That comes in a tale from Peggy Gye, our museum founder who was asked to write a piece for the Bratton History Association journal in 1997. Peggy recalled:-

There was a little laundry in the village, which used a pony and trap to collect washing from its customers, some of whom would take their laundry home after it had been washed and iron it themselves, especially if they had daughters. A local man came to the Museum one day, and when he told me a little story about the laundry, I suddenly realised he was talking about my husband’s family. It appeared that my husband’s grandmother used to send her smalls to the laundry. The laundry woman’s little grandson didn’t like my husband’s grandmother who was his headmistress; he thought she was too strict. So he got his own back by starching her knickers.

There could be a moral here – avoid telling tales about people because in a village, your listener might be related to them. But in this case it was harmless enough. I suspect we all snigger just a bit at the thought of the prim and proper school teacher being made a tad uncomfortable by starched knickers!

And we have a chance to show you two ‘daughters’ of Easterton as well.