Here’s a mystery that we hope somebody out there will solve for us. It’s three Ws we are after – who, when and where.

Here’s the image we are seeking information about. 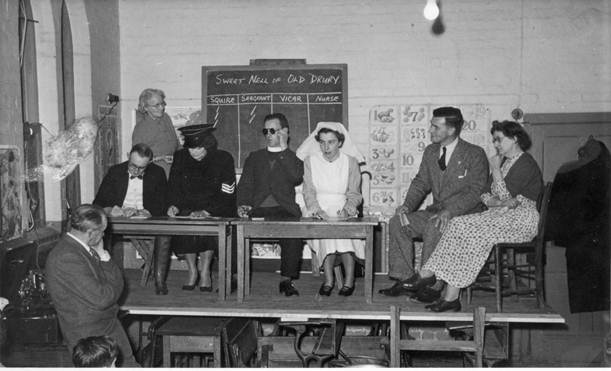 A dramatic production in Easterton in the 1950s – we think

This is in a group of photos that owe their origin to Tom Jefferies of Easterton. It’s an assumption and may be wrong, but we believe this is taken in the old Easterton School. It clearly involves some kind of drama on a very makeshift stage. The blackboard is headed ‘Sweet Nell of Drury Lane’.

This was what seems to be called a restoration comedy, featuring sweet Nell (Nell Gwynne), Charles 2nd and others of the era. It was made into a silent film in 1911. Our image certainly has no characters who look to be representing that era.

What we have is a squire, a police sergeant (who may be Gladys Windo) a vicar and a nurse. They appear to be involved in some kind of competition for the squire has earned three points and the sergeant a couple. Also on stage is the lady chalking scores and a couple of onlookers.

And now it is over to you. Please get in touch if you can tell us anything about this scene.