The Back of the Co-op

Today we offer what we think is a unique view of the back of the Co-op. The photo was taken in 1958. 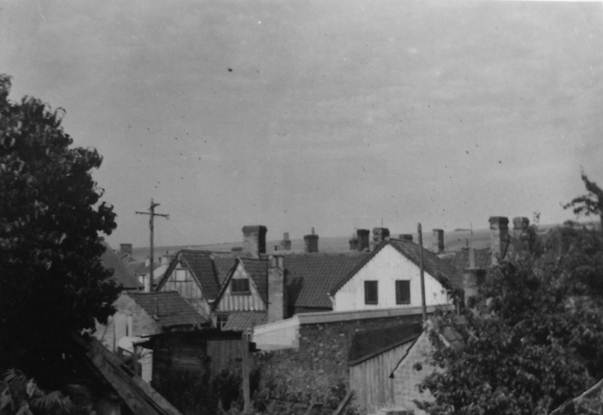 It is the viewpoint that makes this such a difficult to work out shot – coupled with the fact that the buildings in the middle have all altered chimneys since then. In some cases windows have been added or removed and parts of some buildings have been demolished.

Our curator and archivist spent some time trying to sort out where this was taken from, asking various long term village residents for advice.

Let’s start with the information on our museum record which says, ‘photograph of half-timbered gables of the old Market Hall behind the present co-op’. The photo was taken in 1958. The record was written in 1985.

The white gable end still exists behind the co-op and is still white but devoid of windows. The middle gable – one of the half-timbered ones also exists but has been rendered over and is all white and windowless as well. The large half-timbered gable has been demolished, not so long after this photo was taken.

But where was the vantage point? The only clue to location was the chimney between the tree and telegraph pole on the left. That certainly looked as though it could be on the Workmans’ Hall. And it was possible to line up a small chimney to match the photo. From this we think the photo was taken from a raised back garden of a property on High Street. Our best bet is that it was taken from number nine – Bank House. In 1958 the occupants were Tom and Peggy Gye.