Baker is a common surname in Market Lavington. Being a baker was quite a common occupation and, no doubt, that’s where the surname comes from.

The Baker family we are looking at lived at what was once the hardware shop on High Street – next to Woodland Yard and almost opposite the Co-op. 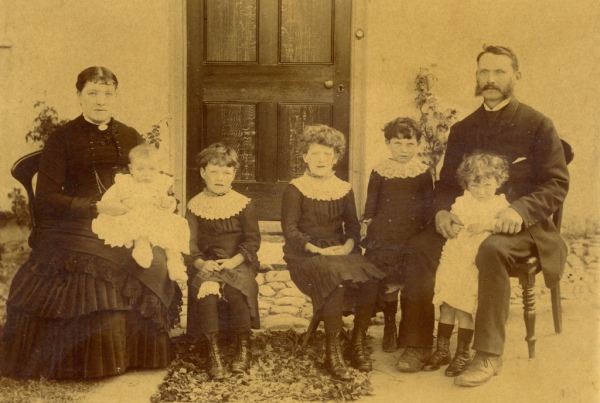 This photo dates from 1886. On the right is father – John Baker. He was Market Lavington born and bred and was aged about 42 when this photo was taken. Apart from his occupation as a tin smith, he also sold items of metal ware, was an avid member of the volunteer rifles and won many awards for this. He also helped manage various parish matters such as the fire brigade.

At the left hand end is john’s wife, Louisa. She was some years younger than John – about 30 and she was born in West Lavington. All of the children were Market Lavington born.

On Louisa’s knee is baby John Baker, known later as Jack. The four older children were all girls. Next to her mother is Margaret Baker. The oldest girl, in the middle, is Annie. Hilda stands next to her father and Mabel is with her father.

Still to be born, and so not in the photo, were Archibald, Ida and Amy who appear on the 1891 census and the youngest, Mollie who was born mid-way through the 1890s.

Descendants of John and Louisa Baker have been very generous with regard to the museum. We have featured some items connected with this family before on this blog.