The Bells, The Bells

At Market Lavington Museum we have recently been given some sheep bells. These bells were given by the daughter of a local farmer.

The bells had been converted into a household ornament by being mounted on a wrought iron frame. They have also been provided with a striker. 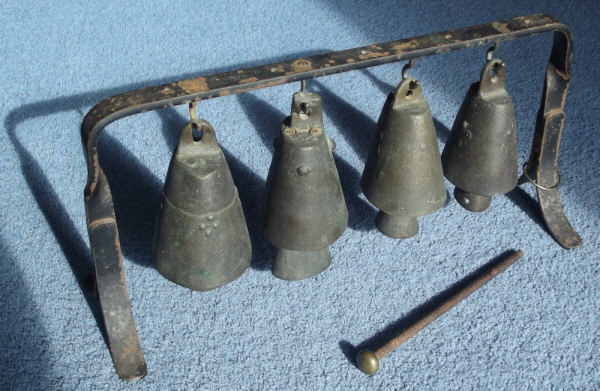 For those interested the four bells play roughly the first four notes of a minor scale. Sorry, we haven’t bothered about what key they are in.

We have been told that these bells were Ministry of Defence (or its predecessor) issue to sheep farmers on Salisbury Plain. We have not been able to verify this idea – the Ministry have no records of sheep bells.

However some of the bells do carry an arrow-head mark. 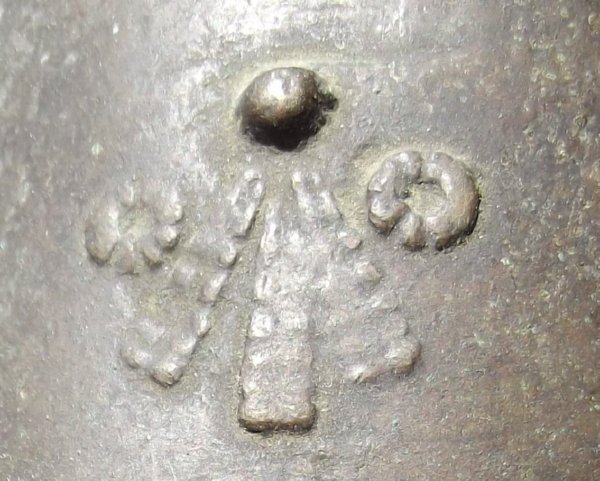 The broad arrow mark on one of the bells

This arrow-head mark can be found on other items of MOD issue. This version was recently spotted by a museum friend at Cotehele./ It was on a ship mooring bollard on the Cornish bank of the River Tamar. 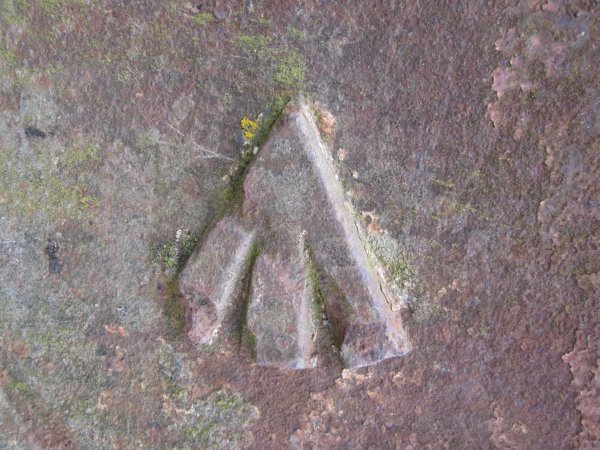 You won’t find this one at Market Lavington Museum. It’s on a mooring bollard at Cotehele Quay in Cornwall.

This extract on the broad arrow symbol is from Wikipedia.

The Office of Ordnance was created by Henry VIII in 1544. It became the Board of Ordnance in 1597, its principal duties being to supply guns, ammunition, stores and equipment to the King’s Navy. The Office and Board used the broad arrow to signify at first objects purchased from the monarch’s money and later to indicate government property since at least the 17th century. The introduction of this symbol is attributed to Henry Sydney, 1st Earl of Romney, who served as Master-General of the Ordnance from 1693 to 1702, since the pheon appears in the arms of the Sidney family.

The broad arrow frequently appeared on military boxes and equipment such as canteens, bayonets and rifles, as well as the British prison uniform from the 1870s, and even earlier, that of transportees in British penal colonies such as Australia. The broad arrow marks were also used by Commonwealth countries on their ordnance. With the demise of the Board in 1855, the War Department and today’s Ministry of Defence continued to use the mark. The arrow also appears in the Ordnance Survey logo. Similarly to hallmarks, it is currently a criminal offence in the United Kingdom to reproduce the broad arrow without authority. Section 4 of the Public Stores Act 1875 makes it illegal to use the “broad arrow” on any goods without permission.

The bells are an absolute delight. We’d love to know more about them = when made, by whom and where. Can you help?