Bishop Tanner was the Bishop of St Asaph in Wales. He was the son of Thomas Tanner, Vicar of Market Lavington.

The Bishop remembered his birth parish in his will. This extract referring to the charity comes from the WiltshireArchaeological and Natural History Magazine for 1872. 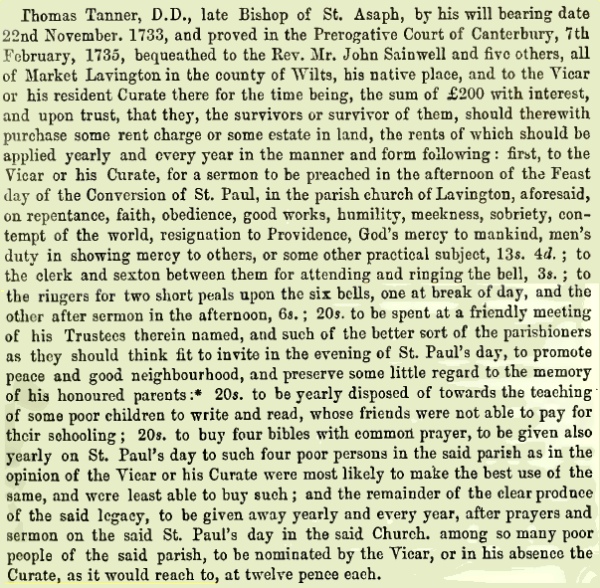 How Bishop Tanner devized his charity for Market Lavington (which included Easterton at this time).

Below is a transcription.

Thomas Tanner, D.D., late Bishop of St. Asaph, by his will bearing date 22nd November. 1733, and proved in the Prerogative Court of Canterbury, 7th February, 1735, bequeathed to the Rev. Mr. John Sainwell and five others, all of Market Lavington in the county of Wilts, his native place, and to the Vicar or his resident Curate there for the time being, the sum of £200 with interest, and upon trust, that they, the survivors or survivor of them, should therewith purchase some rent charge or some estate in land, the rents of which should be applied yearly and every year in the manner and form following:

First, to the Vicar or his Curate, for a sermon to be preached in the afternoon of the Feast day of the Conversion of St. Paul, in the parish church of Lavington, aforesaid, on repentance, faith, obedience, good works, humility, meekness, sobriety, contempt of the world, resignation to Providence, God’s mercy to mankind, men’s duty in showing mercy to others, or some other practical subject, 13s. 4d.

To the clerk and sexton between them for attending and ringing the bell, 3s.

To the ringers for two short peals upon the six bells, one at break of day, and the other after sermon in the afternoon, 6s.

20s. to be spent at a friendly meeting of his Trustees therein named, and such of the better sort of the parishioners as they should think fit to invite in the evening of St. Paul’s day, to promote peace and good neighbourhood, and preserve some little regard to the memory of his honoured parents.

20s. to be yearly disposed of towards the teaching of some poor children to write and read, whose friends were not able to pay for their schooling.

20s. to buy four bibles with common prayer, to be given also yearly on St. Paul’s day to such four poor persons in the said parish as in the opinion of the Vicar or his Curate were most likely to make the best use of the same, and were least able to buy such.

And the remainder of the clear produce of the said legacy, to be given away yearly and every year, after prayers and sermon on the said St. Paul’s day in the said Church, among so many poor people of the said parish, to be nominated by the Vicar, or in his absence the Curate, as it would reach to, at twelve pence each.

This is really a sort of preamble. Tomorrow we’ll look at some of ‘the better sort of the parishioners’.