Market Lavington still has two pubs – The Green Dragon and the Drummer Boy. Back in 1920 there were five. The Kings Arms closed recently and The Volunteer in the 1980s. The pub that closed in the early 1920s was called The Brewery Tap.

This was a small, single storey building on White Street. It was attached to its own small brewery which was behind the pub and also behind the Red House on High Street. That was where James Neate, wine and spirit merchant and brewer lived.

The pub can be seen here in a view which is similar to the one seen yesterday. This picture is probably Edwardian. 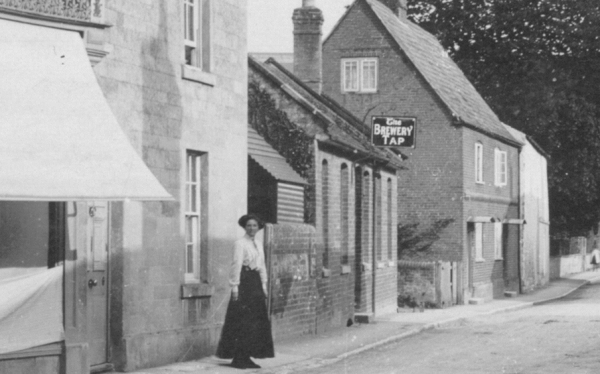 The Brewery Tap, White Street, Market Lavington in the early years of the twentieth century

We can see that the pub was alongside The Clays and, once again we are looking along White Street and past Beech House.

By 1920, James’s son, Norman had taken over. He became the last commercial brewer in Market Lavington.

After the pub closed, it was converted into dwelling houses. People in their 90s have memories of the builders at work, adding an upstairs to the old building.

For some years the houses were known as ‘The Old Tap’. These days they just have their White Street numbers.