Today we are looking at a photo that was taken by Geraldine George. We have met this young lady before, apparently taking a ride in an old clay truck at the brick works.

This time, Geraldine was riding by the brickworks on a legitimate train – one operated by the Great Western Railway. She decided to take a photo of the former brick and tile works where her grandfather had once been manager. 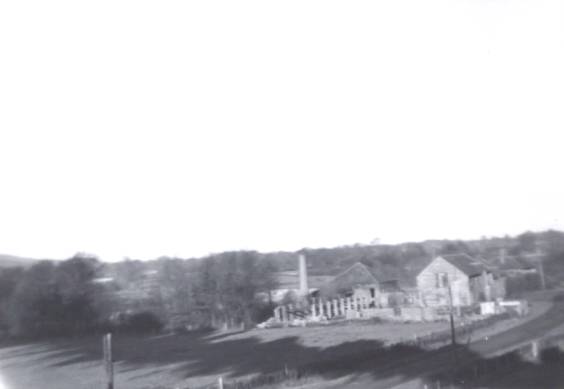 Market Lavington Brickworks - a photo taken by Geraldine George in about 1947.

The works are clearly in the process of demolition.

A zoom in shows buildings under demolition.

Youngsters might be baffled by the strange  shadow which stretches across the photo.

Shadow of the exhaust from the steam locomotive pulling the train from which the photo was taken.

This was a shadow of the exhaust – mostly spent steam, from the loco hauling the train.

Some buildings are still in use for industrial purposes at the old brickworks site, but the quarry has been filled and the area is now used as a trading estate.