This delightful front garden, just outside a cottage, is well known to us at Market Lavington Museum for it is our museum building. The women outside are members of the Burbidge family. 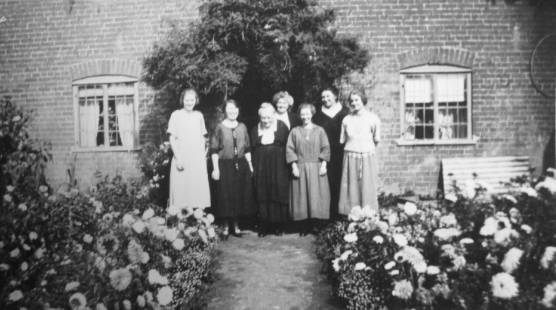 Members of the Burbidge family, including visiting relatives from America, outside The School House which is now Market Lavington Museum. 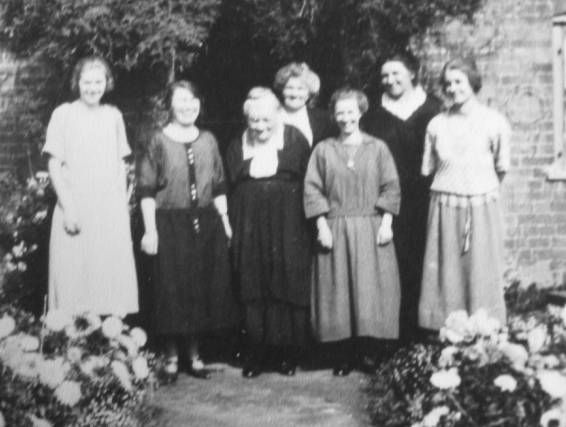 Close up on the people - Flo Burbidge on the right with her mother, in grey, next to her.

On the right hand end is Flo Burbidge who became Mrs Shore. She was born in the museum building in 1908.  In  1986 Flo and her husband Bert gave the following information to Peggy Gye.

Photograph taken outside the school house – with bushes around the porch and beds full of flowers.

Mrs Flo Shore on the right with her mother, Mrs Burbidge, on her right, with relatives from Australia.

Mr Burbidge came from Worton where his father was a bricklayer. He worked at The Grange at the time of his marriage and later moved to Surrey with his employer where he had a nice new cottage where his daughter Dorrie was born. However, his mother, Mrs Burbidge senior missed him and got him a job with Miss Bouverie at The Old House’.

Mrs Burbidge didn’t like living in the churchyard and the tolling of the bells greatly depressed her.

Flo Shore was born in the school house.

The Burbidges followed a family called Godden who had lived there previously.