The Burnett Family of Easterton

We know that Charlie’s mother was Beatrice Price who was born in Market Lavington (probably Easterton) in 1867. She was the daughter of Richard Price and Elizabeth Draper and was baptized on the 17th of November, 1867 at St Mary’s, Market Lavington.

Beatrice died on 13th of February 1939 at New Street (The Muddle) in Market Lavington and was buried in Easterton Churchyard.

Beatrice Price married Henry Burnett, in 1888. We do not have the precise date or location, but the marriage was registered in the Devizes district

Henry Burnett had been born on the 2nd of December, 1861 at Andover in Hampshire. He died on 29th of October 1935 in Easterton.

Henry and Beatrice Burnett had the following children

Herbert James Burnett, born 3 May 1895 in Easterton.  Died 2 Jan 1976 in Devizes. Occupation Blacksmith (like brother Charlie he worked for the Gye’s of White Street, Market Lavington.

Three of the children feature on a photo of Easterton School students. We had the school photo dated at 1906, but in the light of this data, I think we should change that to more like 1900. You can click here to see the Easterton school photo.

We have also received a family photo of the Burnetts. Thanks to Ann for this lovelyimage. 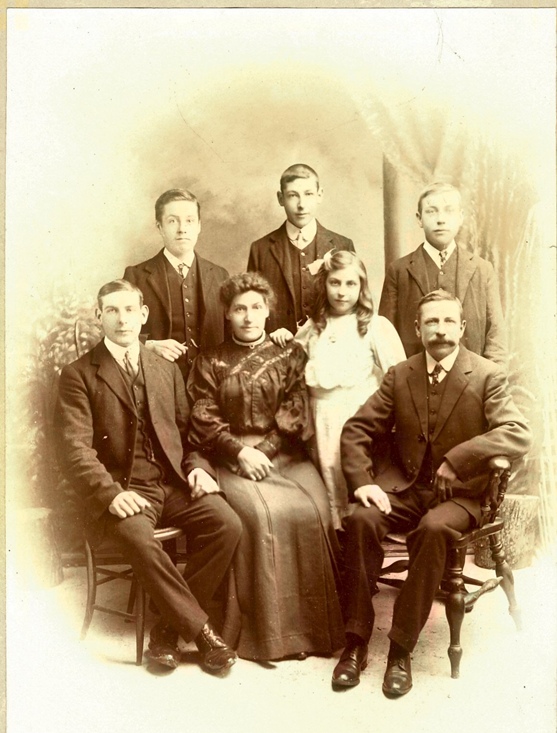 The Burnett Family of Easterton around 1910. A copy of this photo is now at Market Lavington Museum

In the back row we have: Frederick George, Reginald Harry and Herbert James (Bert).