The bus from Lavington to Pewsey

The bus we show today was on one of many routes that were operated by the Lavington and Devizes Motor Services Ltd. A 1935 timetable, which we have at Market Lavington Museum gives some idea, for it is table 13 which deals with what might have been assumed to be the main route. There must have been at least 12 other routes.

Extract from a 1930s bus timetable at Market Lavington Museum

There’s an interesting social thought to be taken from just this extract, for Wednesday was different from the other weekdays, the traditional half day, and had a separate timetable. But Saturday was just another weekday. We can also see that Market Lavington residents could see  a film at one of the cinemas  in Devizes and have time to get the last bus back. By current standards we can see, too, that the pace was leisurely with an average speed of about 10MPH.

But back to our bus to Pewsey. This image dates from the early 1920s. 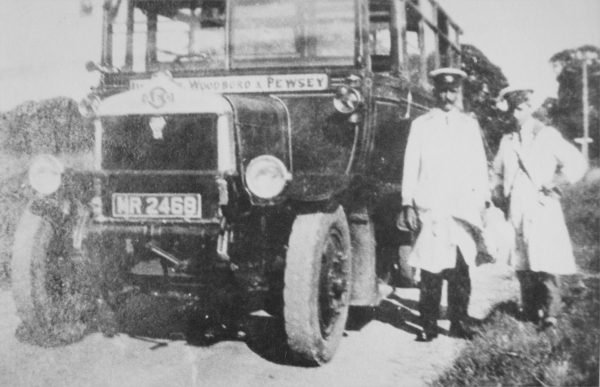 The Lavington to Pewsey bus makes an unscheduled photo stop.

The driver, Charlie  Sheppard, we have met before working a Trowbridge bus. (Click here)

The conductor is Mr Boulter  from Cheverell.

We don’t recognise the bus manufacturer. Can anybody help us with that?