The Bus to New Zealand?

At Market Lavington Museum we like to keep a record of present day events so that  future generations can see and be amazed at the strange things we did. And they don’t come much stranger than the events of Saturday 3rd September 2011 when it was possible to go, by bus, to New Zealand.

Many people in Market Lavington, unaware of the special nature of the day would have been amazed to see a London Routemaster  bus making its way along The Spring at about 10.30 in the morning. 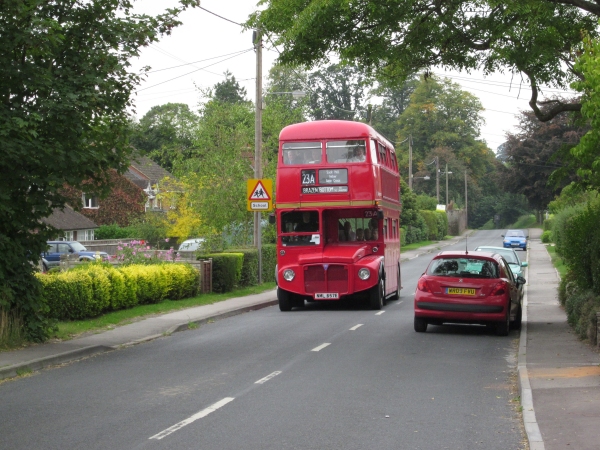 Ah yes, said the experts, waiting at the bus stop at the end of Park Road. It’s the service 23a for Brazen Bottom. 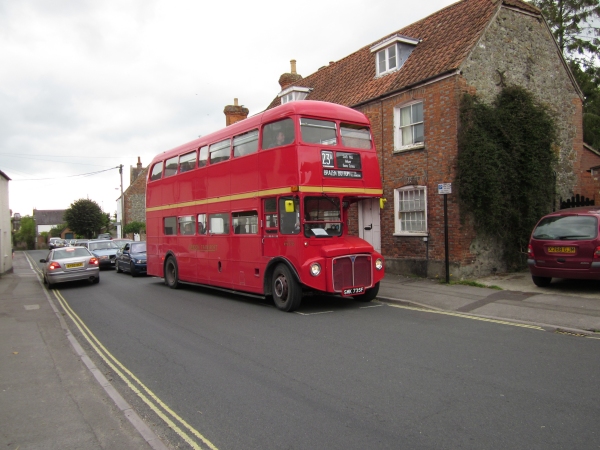 3rd September 2011 - the bus on Church Street in Market Lavington

The bus made its way along Church Street 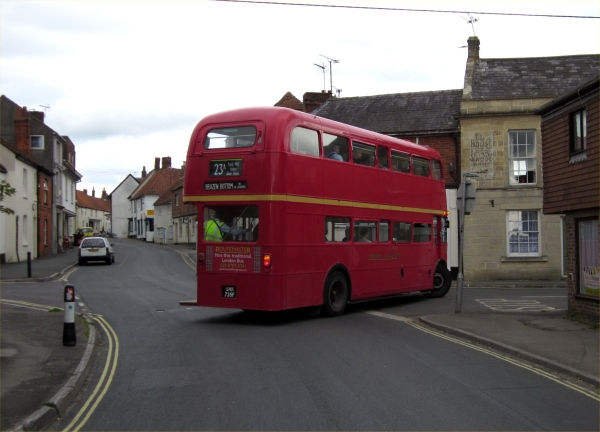 Turning onto White Street for the ascent of Lavington Hill

It then turned onto White Street. 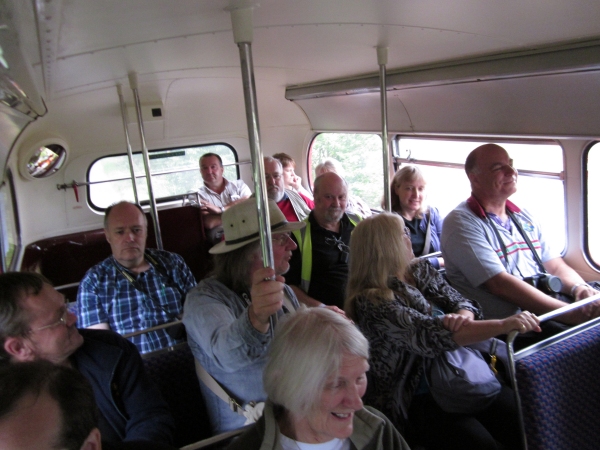 Passengers on the bus as it slowly grinds up Lavington Hill

Passengers could then enjoy the hard slog (for a 43 year old bus) of the ascent of Lavington Hill.

Plenty of people did know about the service and the bus was well loaded.

Actually, this was one of five former London Routemasters that were running an intensive service between Market Lavington and Tilshead via Imber to Warminster. This was in connection with the Imber open day.

Imber, of course, is not in Market Lavington so some Market Lavington people might not know that this was a village, on Salisbury Plain from which the villagers were removed, almost at the end of World War II to make space for an artillery training range. Most villagers believed they had been promised they could return home when hostilities ceased. That has never happened but after a campaign, some 50 years ago, the village was opened to visitors for a few days each year. For the last couple of years, a group of Routemaster owning bus enthusiasts have run a service of buses on an open day. This year, for the first time, they included Market Lavington on their itinerary.

In case ‘bus enthusiasts’ sounds like a bunch of amateurs – it was not. It was a highly professional set up and the bus crews all held the required qualifications and certificates.

The bus reached the top of Lavington Hill and then headed along the Ridgeway to the ‘terminus’ at Brazen Bottom. That’s  the name of a former farm which is actually in West Lavington parish. 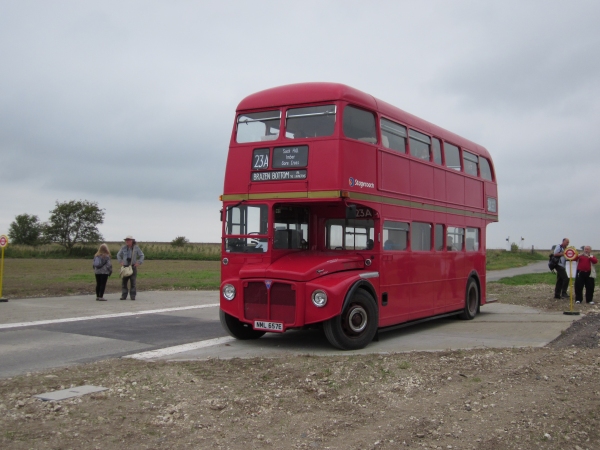 The bus at Brazen Bottom

There’s the bus at Brazen Bottom, next to its bus stop with a view back towards Market Lavington.

Oddly, although the bus had got into West Lavington, it was about to enter what had once been an outlier of Market Lavington – Gore. The area around Gore Cross was, sensibly enough, transferred to West Lavington in the 19th century.

Gore was one of the interchange stops for buses, so, as one bus arrived from Brazen Bottom, another, an open top vehicle, was waiting for passengers wishing to travel to New Zealand. 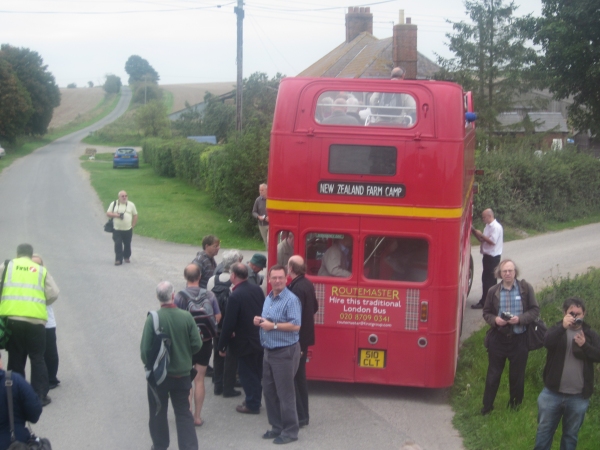 The destination board makes it clear that this is New Zealand Farm Camp, named because New Zealand soldiers were based there during the first world war. 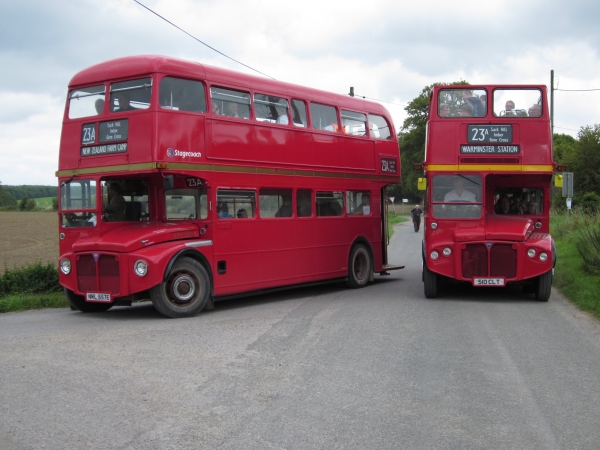 And there we have a bus pausing at New Zealand so that travellers could take a photo.

It had better be added that really the day was about Imber but perhaps this blog for Market Lavington Museum is not the place to go there. Suffice to say that at Imber there were refreshments in the church alongside displays about the village. Toilets were provided too. It was possible to travel on the buses all day for a fiver. Last year the organisers were able to donate £400 to the Imber Church fund.  A different charity was supported this year and we look forward, very much, to the next bus service in 2012.

You’ll be able to see more pictures of this day – both buses and Imber by clicking here.

It really is like the old joke. You wait a year and then three come at once. 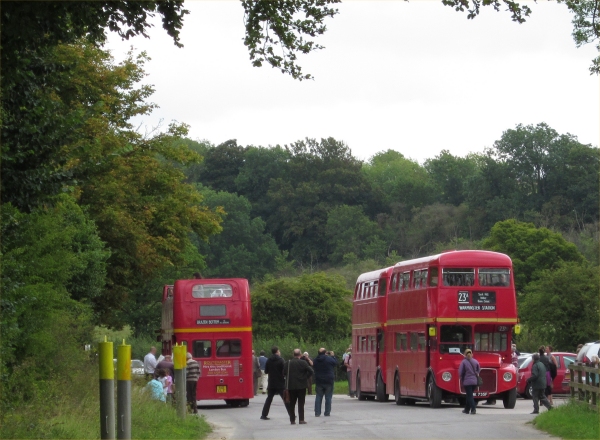