The Second World War was, no doubt, a bit of a tough time for shop keepers. Coping with all of the regulations must have been onerous, with customer’s ration books to be dealt with. Customers were registered with specific shops so there was little chance of any extra trade. On top of that, prices were controlled by government edict.

It was in these conditions that a group of Wiltshire butchers met in Market Lavington. 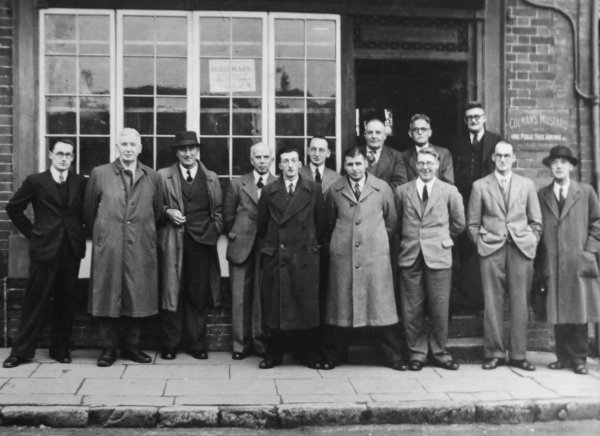 Local butchers meet at Market Lavington in 1940, to discuss rationing.

We believe the year was 1940, and the butchers met to share ideas on coping with rationing.

How wonderful, that in times of difficulty, the local rivals came together for mutual support.

There’s new information on this photo. We had Les Francis named as the man at the right in the doorway. Next to him is George Pike who had the other butcher’s shop in Market Lavington.
At the extreme left is Les Francis’s son, Peter who gave up butchery to become the village photographer.
In the front row, second from the right hand end is Bob Cowdrey and fourth from the right is Bob Wishart.

Yet more information has come from Mark Douse who is the present day butcher in the shop shown in the photo.

The small man (front and third from the right) with the grey jacket and glasses and a black tie, is Mr Tommy Cartwright who ran Walter Rose in Devizes until the late 1960s.
The man to his right is Jack Wishart (not Bob) who was a butcher in Devizes.
The man third from the left with a dark trilby hat is Mr Vigor from Woodborough.
The small man fifth from the left at the back with dark hair and glasses in Mr Bob Cook who ran the butchers in Devizes High street.
Thanks for this extra information.