Here we have a photo which is not well documented. The church choir, complete with trophy, pose outside the church of St Mary, Market Lavington. 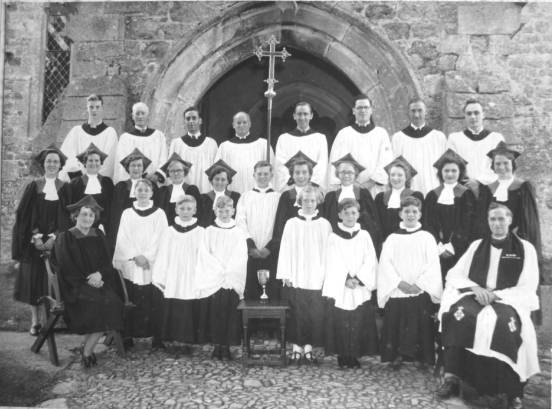 Market Lavington Church Choir in about 1950

We do not have a year although there is a narrow band, for we know the vicar, at front right, was the Reverend Arthur. This narrows the date to the time between 1944 and 1953.

We also know that the organist, at front left, was Mrs O’Reilly. We have met her and her husband before on these pages (click here). We know that Miss Florence Anna Eldin married George O’Reilly on 19th July 1945. So, presumably, the photo dates from after then, although with a poorly documented photo, we can’t be absolutely certain.

It is Mrs O’Reilly we are concentrating on today. She was born, Florence Anna Eldin in 1893 in Downham, Cambridgeshire. The family still lived at Downham when the 1901 census was held.

In 1911, aged 18, she lived with her parents in Market Lavington. Her father, William, had the butchery business, which still operates near The Green Dragon.

As mentioned above, Florence married ex soldier and local chicken farmer George O’Reilly in 1945 when she was in her 50s and George was nearing 70. The couple made their home at The Red House, on High Street, Market Lavington where Florence and her parents had lived.

The marriage was short lived for George died in 1948.

We do not know when Mrs O’Reilly left Market Lavington. We find no trace of her in directories or electoral rolls from the mid 1950s to the mid 1960s.

Florence died in 1973. Her death was registered in the Wells district of Somerset.