Now here’s a thing! We can tell you which day of the year the photo featured today was taken, but we cannot be certain of the year. 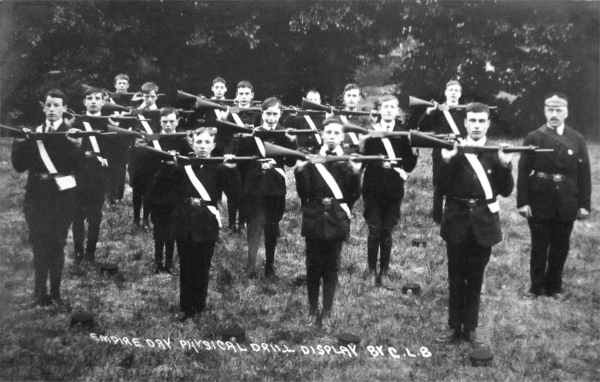 Drill display by the Church Lads’ Brigade on 24th May, probably 1911

The photo caption tells us it was Empire Day Physical Drill by C.L.B. The C.L.B. was the Church Lads’ Brigade.

Empire Day was first celebrated on May 24th 1902. The day was chosen because it had been Queen Victoria’s birthday. These days the day has become Commonwealth Day and is celebrated in March but in those far of Edwardian days youngsters used to chant

The twenty fourth of May.

At Market Lavington Museum it was originally thought that the photo dated from the time of the 1914 – 1918 war but an afterthought has it as 1911 – the 24th May, of course.

The Church Lads’ Brigade was first founded in 1891 and still operates today – but now includes girls in both name and membership.

We know almost nothing of this organisation at Market Lavington Museum but presumably this photo, which we certainly think is an Alf Burgess image, is of a local branch. Can anybody enlighten us further? You can click here to send an email to the curator.