It is often delightful to see the way people found amusement in times past. Here we look back to about 1918. Even BBC Radio was in the future, let alone TV or all the modern electronic entertainment devices. Rich households may have had a gramophone or phonograph but otherwise entertainment was what you made for yourself – alone or with friends.

Putting on shows has always appealed to children and today we bring you the cast of such a show – just captioned ‘The Concert Party’. 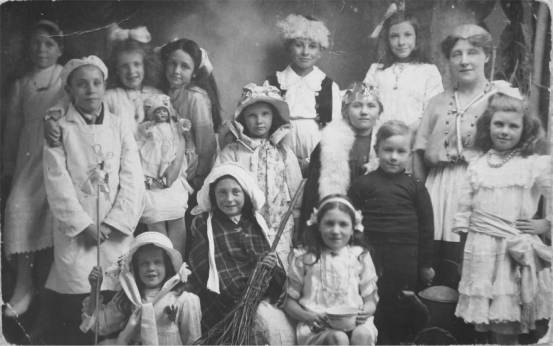 This is another of those well-captioned photos – we know the names of the people.

In the back row we have Doris Baker, Ivy Trotter, Edna Mills, Jack Potter and Rose Ingram.

In the middle row, there is Ted Oram, Stella Robins, Mabel Coleman and Mrs Witchurch.

The youngest of the children would now be aged about 100 but there will be plenty of people who could tell us more about them. Do get in touch if you can.