Churches obviously look after the spiritual need of a community but they also have a social side. Today we are looking at a quite non-religious venture by the Congregational Church.  Their successors in 2012, Trinity Church, continue with the provision of social activities. It is Trinity who bring the cinema to Market Lavington once a month, showing top notch films (most recently it was ‘The Best Exotic Marigold Hotel’) along with the popcorn and bar to give the Community Hall a real cimema feel, with the bonus of it being a very social event. Trinity, without a church building of their own, have recently purchased a former shop in the very centre of Market Lavington and hope to start a tea room/drop in centre.

So perhaps we shouldn’t be surprised that in times past, the Congregational Church Bible Class had their own football team. They are pictured below. 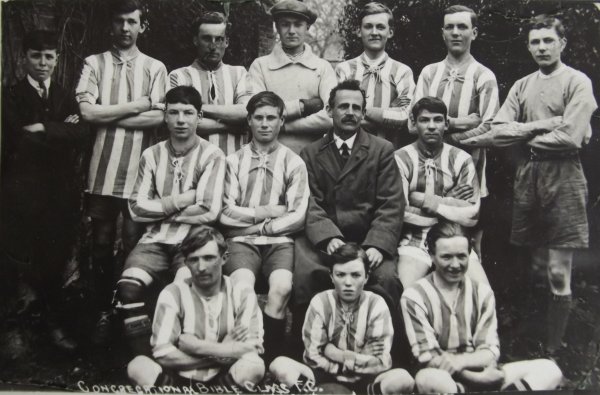 We have no date for this image but we can take a guess based on the one person we can positively identify. That’s George Pike, the chap in the coat who looks every inch the manager. George was a stalwart of both the Congregational Church and of football in the area. We suspect if he saw an opportunity to raise a football team, he’d take it.

So, George, who we have met before on these pages (check out this page) was born in 1877. If we suggest he looks around 40 in this shot, then we could say this was World War I time. Presumably there would not have been these young men available during the war, so it could be just before or just after the war. We favour   around 1920 as the time.

Of course, we want help. George looks to be the oldest person in the photo. Maybe some of the others can be identified. Can you identify any of the lads who played for Congregational Bible Class F. C.?