The Congregational Church in 1980

Being Christian, but in an independent way has a long tradition in Market Lavington. The parish had a strong Quaker presence in the 17th and 18th century and the Quakers built there own house of worship, which still exists although now it is an artist’s studio.

When Quaker numbers dwindled, in the 19th century the Independent Church took over the premises, but they outgrew it and they built a new church in 1892, keeping the old chapel as a Sunday School building. The newly built church was the Congregational Church. This became the United Reform Church and then, in combination with two other local chapels it became Trinity Church.

Recently, the building was found to be in need of some repair and the church decided to move its services to the Market Lavington Community Hall. This proved so successful for Trinity Church that they decided to make the arrangement permanent. The 1892 church is to be sold off.

Some of the contents of the old church building have come to the Market Lavington Museum. We have seen, in this blog, some collection boxes and crockery. But now the building is being offered and we, at the museum, have been given an aerial photo of the church building and surrounding area, which was taken in 1980. This is a large image – some 80 by 50cm. We’d like to thank Trinity Church for donating the picture to the museum. 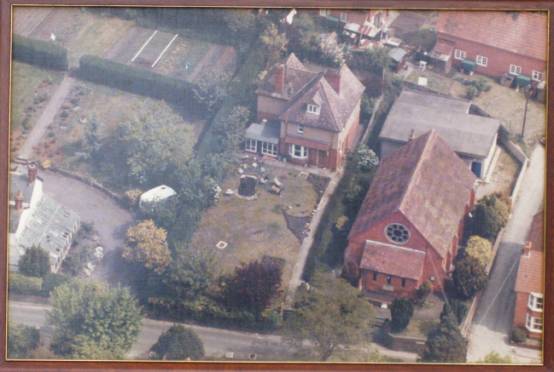 The church is at the right, made of Lavington bricks from the brickworks owned by the Box family. Next, to the left is the Manse building which, at that time had nowhere for a resident to keep a car. Behind the church is the Powner Hall, named after a former minister of the church. And Stobbarts Road runs alongside the church, leading to The Clays.

The Powner Hall is now derelict, so that is sure to go when the church is sold.

Maybe, in a couple of years time the museum should try to get an updated aerial photo of the area.