The Cooper Family at New Farm

New Farm is, or rather was, one of the farms on Salisbury Plain, in the parish of Market Lavington. To reach New Farm now you’d have to go to the top of Lavington Hill and then, if the flags weren’t flying, continue on the track across Salisbury Plain. After a mile and a bit you’ll find the track passes through a bit of a wooded area. New Farm was in that wooded area on the right hand side of the track. We have looked briefly at New Farm before and this page, http://marketlavingtonmuseum.wordpress.com/2010/10/25/a-resident-of-new-farm/  has a photo of the area taken in 2008.

Today we are looking back at a photo believed to have been taken in 1909. The person who gave it to the museum believes it is New Farm although it has to be said, we have doubts because stone like that big blank wall is made of just isn’t found on Salisbury Plain. However, the family shown is a Market Lavington family so the picture is definitely worthy of being seen. 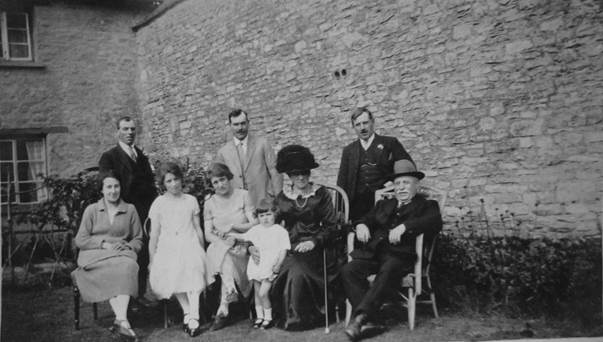 This is the Cooper Family (possibly) at New Farm, Market Lavington in about 1909. Seated at the right is James T Cooper, born around 1865. Next to him is his wife, Sarah Jane (née) Taylor also born around 1865. Behind them in the dark suit is their son, George Thomas Cooper born about 1887. The other people are not known, but on the 1901 census (at New Farm) the other children of James and Sarah are Mary, born 1889, Walter, born 1891, Charley, born 1894 and Jacob (named after his grandfather) born 1898.

Sadly, nobody alive is going to recognise New Farm. It is now over 100 years since it vanished. But we remain hopeful that people just might be recognised.