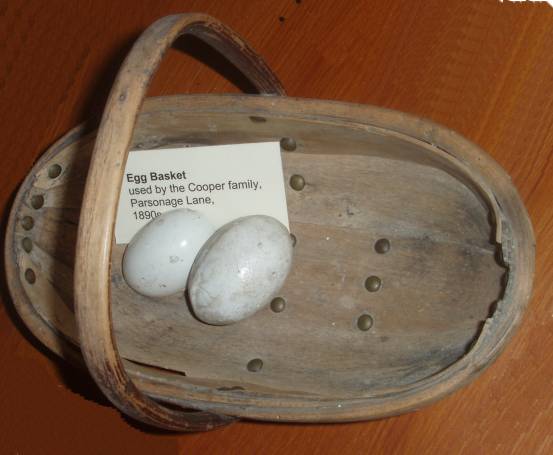 Trug style basket used by the Cooper family of Parsonage Lane for egg collecting around 1890. The basket is on display in the kitchen at Market Lavington Museum

This little basket is of trug style. We do not know who made it  but we know that the Cooper family, of Parsonage Lane, used it for collecting and carrying eggs during the 1890s.

Current tradition tends to think of trugs like this as from East Sussex which was and remains a centre for trug making. But they were made across the South of England. It is possible that the Copper’s trug was locally made.

The laths of our trug, traditionally made from willow, are fastened to the frame and feet of the trug with substantial brass rivets. The rim and handle are probably of chestnut, although ash was used as well.

We looked at a little history of this branch of the Coopers on this blog back in May 2010. You can click here to read this.

The head of the family, Jacob Bolter Cooper had started his working life as a farm labourer but by the time this egg basket was in use he was a farmer in his own right.

We now know that Jacob was at his Parsonage Lane premises until at least 1911.

Perhaps the trug was more used by his wife, Mary Ann (née Taylor) or possibly by his children, James, Alice or May Ethel. Egg collecting was a task often given to children.

The pair of eggs in this trug are made of a ceramic material.